The Rainbow Machine (1998) is a large steel structure that is suspended 9 feet off the ground and sprays a wall of water creating a full spectrum rainbow anytime the sun is shining [1]. Rebecca Cummins, the artist, created this structure with the intent of being able to recreate a natural occurrence in nature. The rainbows appear high in the skype in the early mornings and late afternoons, however, during mid-day the rainbows appear right on the ground as if they’re in front of you.

The concept of recreating a nature occurrence is interesting because it takes something you would see normally and puts it in an artificial environment. Another example of recreating nature might be Virtual Mirror – Rain by Artist Tao Sambolec [2]. He created a series of installations that emulate natural phenomena, including wind and rain, in real time. Rain specifically has more similarity due to its use in water as part of its system. The system created water droplets that imitated the rain outside, however they would fall up instead of down in the artificial environment. Another related and fascinating work is RainDance (1998) by Paul DeMarinis, with whom Cummins has collaborated.

In the essay, “The Fantasy Beyond Control,” Lynn Hershman Leeson writes about wanting to control environments as well as interactive systems [3].

As technology expands, there will be more permutations available, not only between the viewer and the system, but between elements within the system itself. Some people feel that computer systems will eventually reflect the personality and biases of their users. Yet these systems only appear to talk back. That they are alive or independents is an illusion. They depend upon the architectural strategy of the program. However, there is a space between the system and player in which a link, fusion, or transplant occurs. Content is codified. Truth and fiction blur. Action becomes icon and relies on movement and plasticity of time – icono plastics and logomotion.

Systems such as Virtual Mirror – Rain and The Rainbow Machine involve outside influence whether it be the rain or sun in order for them to function as intended. The control factor involved is the ability to take away or influence those inputs. The appearance of the rainbow in the Rainbow Machine is controlled by the angle in which the light hits the water and whether or not there is light. 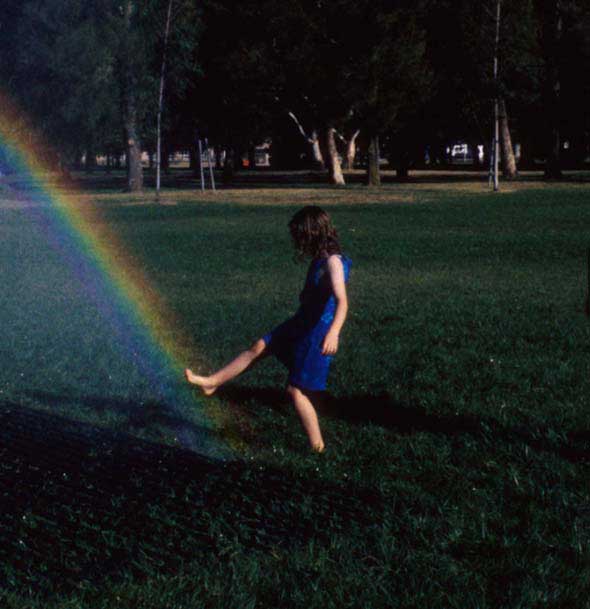 With the constant advancements in technology recreations will become more and more complex such instances such as rainbows and rain being the start where in a few years the results might be entire waterfalls or mountains being recreated. The Rainbow Machine is a great example because rainbows appear normally after a storm or heavy rain and being able to experience one especially up close is a moment that some people rare if ever get to experience.