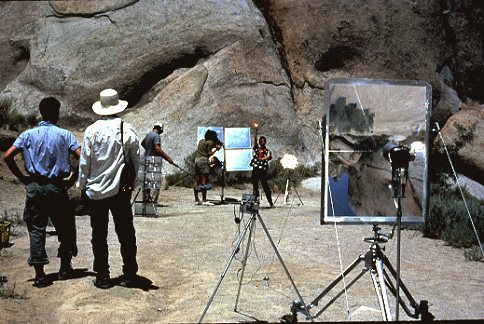 View of sculpture installation and performance in canyon, transmitting encoded sunlight from background to foreground lenses and into a vacuum particle chamber. Smithsonian World film crew documenting in background.

Brixey conceived this cosmic-scale collaborative project in order to make visible the energy potential of sunlight. On a typically hot, clear June day in the Mojave Desert, a dancer swings her arms and turns, then bends to pick up and scatter sand. Behind her are four large mirrors configured into a square, and a similar set-up, plus 19 smaller mirrors arranged in a hexagon, are at her side. In front of her, a vacuum flask filled with graphite particles is positioned behind a large magnifier. The flask intercepts the magnified solar energy that bounces from the mirrors through the lens, making the particles rise and move. The dancer passes through the beam of light, interrupting its flow, and the particles fall. As a romantic flourish, as Brixey reads a love poem his voice also modulates the rise and fall of particles. Einstein is Brixey’s favourite artist – a man whose ideas influenced artists and changed the way humans perceive reality. Brixey comments that artists look at projects such as his and consider them science, but scientists laugh and see it as art. (Shanken, Art and Electronic Media, 2009, p 71).

As the artist notes,

The installation was designed around a light encoding and transmission installation integrated with choreography and dance performance. The project was designed to encode sound, images, and motion into sunlight, then decode the performance transmission by a novel receiving device sensitive to radiation pressure (the kinetic momentum of photons). The project’s primary installation system used sun tracking heliostat arrays (dynamic sun-tracking mirrors) to collect and reflect intense sunlight to a receiving station 50 yards away….

Photon’s have no mass but can impart their kinetic momentum to objects they strike. They can impart twice the force if the object is highly reflective (like a graphite particle). One square mile of sunlight in a cloudless desert sky exerts about 2500 to 3000 grams (or around six pounds) of pressure on the surface of the Earth. If that portion of the Earth were highly reflective like a mirror, that number would double making the sun exert approximately 10 to 12 pounds of radiation pressure.

Photon Voice’s heliostats transmitted around 4/1,000,000th of a pound of radiation pressure (or 0.002 of a gram) to the receiving station. With the weight of the graphite particles being so small and the force of the radiation pressure in a vacuum (with no radiometric forces applied) so intense, the sunlight is stronger than the local effect of gravity and creates a artificial-gravitational like field for the particles to move in.

During the performance, the sun-tracking mirrors would transmit sunlight to the receiving station where the graphite particles freed from their Van der Waals forces by a powerful ultrasonic shock would begin to levitate. Once in the freedom of the sunlight they would form a flat oblate disk, much the way one imagines a galaxy or solar system forming. Once trapped in the light, the “radiation pressure” cause each particles to spin like a planet on a unique axis.

Like threading a needle 94 million miles from the sun to the earth, and then farther down into a tiny sphere, the modulated sunlight created by the dancer moving through multiple beams of variable intensity radiation pressure constructs at a distance a full 3-dimensional force field in real time, carving microscopic sculptural forms in a vacuum at the scale of just the interaction of photons with electrons in matter. 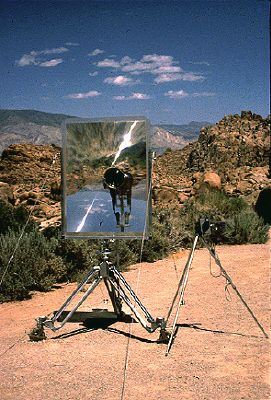 Detail of transmitting and receiving apparatus during performance 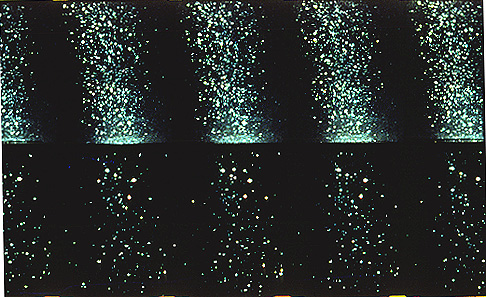