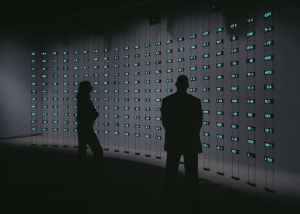 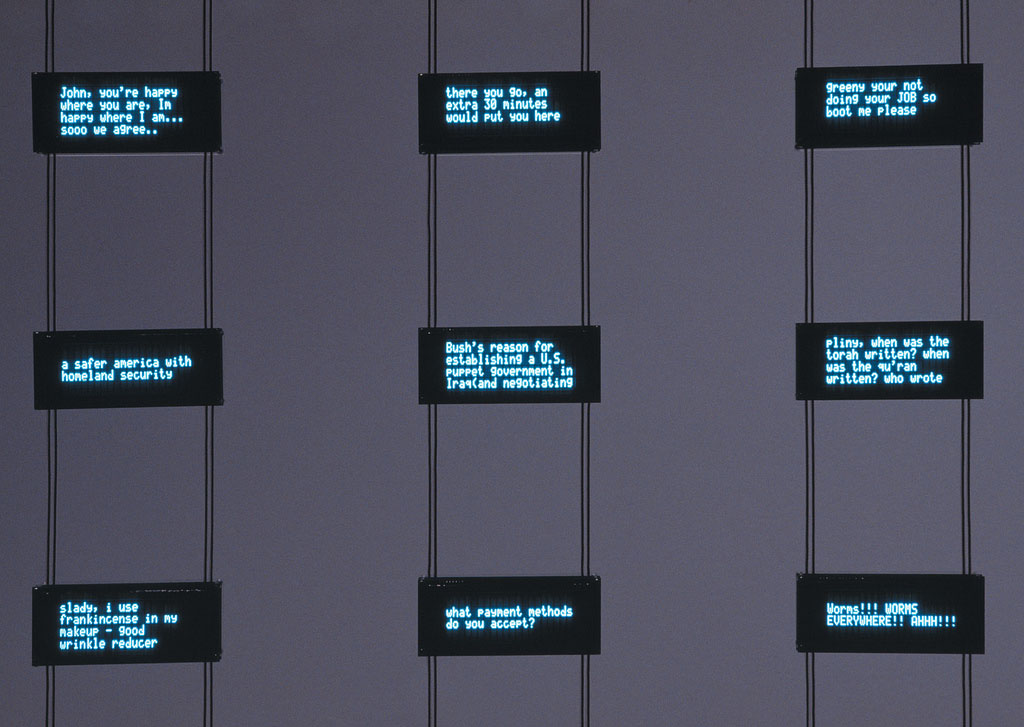 Listening Post, created by Ben Rubin and Mark Hansen has become legend. Its 231 suspended fluorescent displays hung at the Whitney Museum of American Art for four years.  It is now part of the permanent collection of the Science Museum, London and the San Jose Museum of Art in California, and is in constant demand for exhibitions around the world. It is comprised of small monitors that display random quotes found on listserves on the Internet. These are determined by various algorithms: one selects first-person statements, another selects the most infrequently used words. An artificial voice randomly reads aloud some of the quotes, accompanied by music. 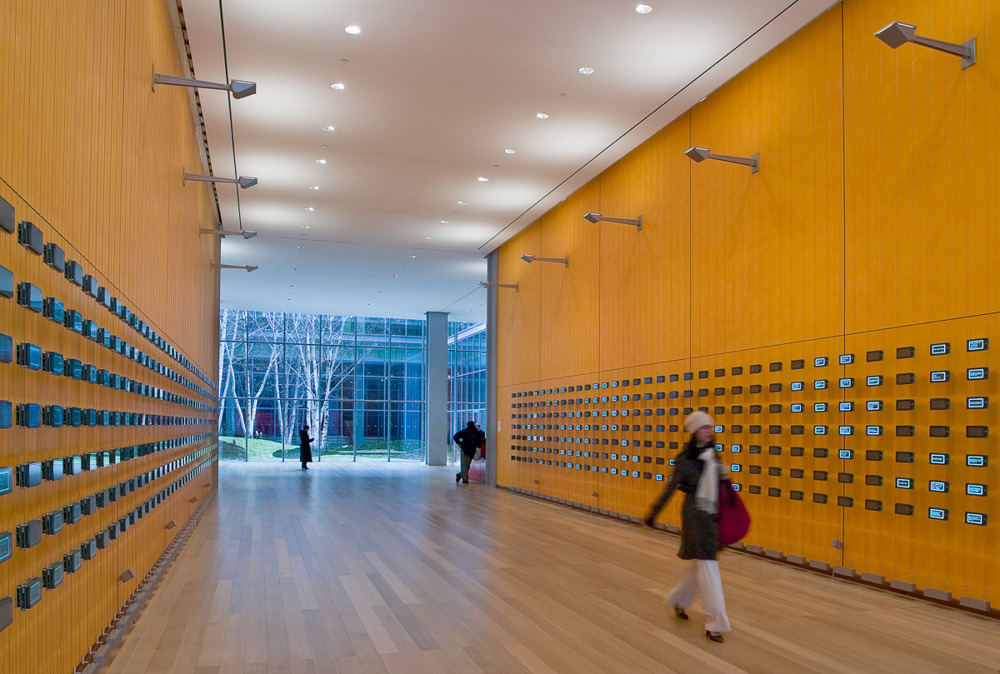 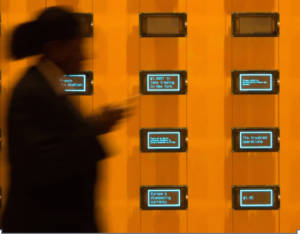 For Moveable Type, Rubin and Hansen used traffic inside the building of the New York Times (which commissioned the work) as the artwork’s source of data. “The installation draws its content from three sources: a live feed from The New York Times, capturing text and data in near real-time as the information is published; the activities and comments of visitors to The Times’  Website; and the complete Times archive dating back to 1851” [1]

Moveable Type uses some of the same techniques as Listening Post. The algorithms are designed to select quotes based on certain rules. As seen in the video, one feature is to let all the 560 fluorescent screens display letters to the editor (accompanied by typewriter sounds). Another is the appearance of quotes from that day’s paper which begin with the words ‘I’ and ‘You’,  placing them next to each other by contrast (or not).

For Listening Post the idea was to visualize the collective consciousness, a form of eavesdropping, making the Internet be seen and heard and letting the viewer be surged into this force field. For Moveable Type the idea is to view the news as seen by the New York Times in an exploding charged environment. To take bits of news and display them all together, ripped out of their original context and giving them a new context. Also, the process and the energy that is previous to the publishing of a newspaper is now on display. With this last feature, Ben Rubin and Mark Hansen want to give credit to this hard work.

Is this augmented reality? Is it media archeology? Is it remediation?

Peter Weibel states that “the image has mutated into a context-controlled event-world, in which the context may constitute a different visual system, sound sequence, machine, human observer, distance or pressure….  the system itself is just as variable [as the image] it will behave like a living organism.” [2] As Bill Viola put it, “chopsticks may be a simple eating utensil or a weapon, depending on who uses them” [3].

Similarly, Rubin and Hansen try to give their content a new context (different visual system and sound sequence), thereby transforming it into a big living organism. It behaves very randomly and every day it has its busy moments and its quiet moments. Its behavior is related to the behavior of the people and the flow of information in the physical and information spaces of the leading newspaper in the US.  Moveable Type may not be as readable as The New York Times but it provides unique insight into the site of the newspaper’s production in an aesthetically stimulating way.