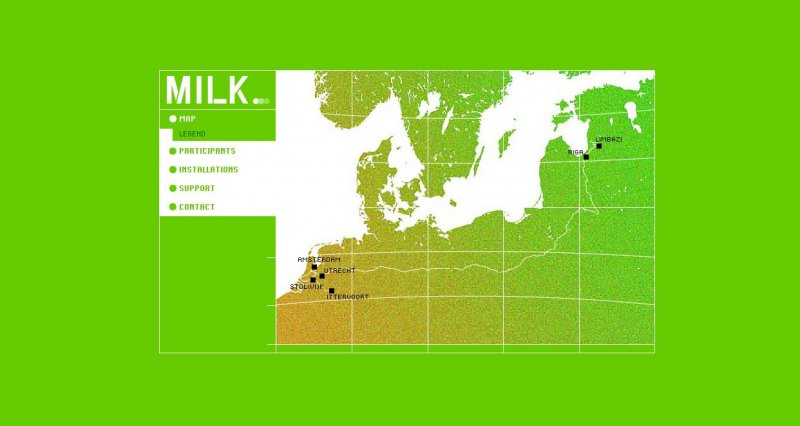 Esther Polak and Ivar van Bekkum’s MILKproject, produced in 2003 and 2004, is a prime example of locative art; works that utilize location-based media such as GPS or Google Earth in order to explore spatial interaction, or in the case of Polak and van Bekkum’s work in question, human reaction to digitally tracked patterns. The project involves tracing the movement of various European dairy farmers, collectors, salesman, (and more) via GPS, as they function as small parts of a large, dairy-transporting whole. Once their movements have been tracked, the GPS dot patterns are rapidly played back to the participants in sequence, who subsequently comment on their own routines. This extra wrinkle of subjectivity in the work serves to address the notion of removing humanity. More specifically, the work asks what can be regained from viewing the patterns of one’s life when all the humanity has been drained and reduced to coordinate values.

This work is one whose status as art in the traditional sense is difficult to discern, but can be more easily understood in the context of electronic art. Though MILKproject is undoubtedly an electronic production, it does not strive to utilize its technology to recreate or pervert traditional art as many other projects do. MILKproject is a work that could only exist because of the recent emergence of location-tracking technology and the processing power of modern computers. As the Austrian physicist and artist Herbert Franke noted in the early 1970s, the “speed of execution” of computers allows for a greater freedom in art due to practicality. Franke also noted that the “fast working capacity of the computer permits the production of large series.” [1] In regards to MILKproject, the large series in question is the sequential display of GPS coordinates, played back to the participants in the work. The power of computing and the locative technology is the driving force behind the project, allowing for the expansion of “the creation and distribution of art, including its manifestations as code.” [2] In the case of MILKproject, it is not the haphazard arrays of coded GPS dots or the motion of the participants themselves that constitute the work, but rather the collective interaction with the space, both in the moment of action and upon reflection, that form the piece. The initial movements of the subjects is the first human motion, which is reduced to a digital signal by the GPS technology. Lastly, the participants’ viewing of this signal and their insights is an attempt to re-translate back into the language of the “natural world.”

Polak & van Bekkum’s other work often explores the same themes of spatial interplay through the use of GPS technology. An earlier project, entitled Amsterdam RealTime, tracked the movements of Amsterdam inhabitants as they went about their daily lives, gradually creating what could be described as a subjective map of Amsterdam. [3] 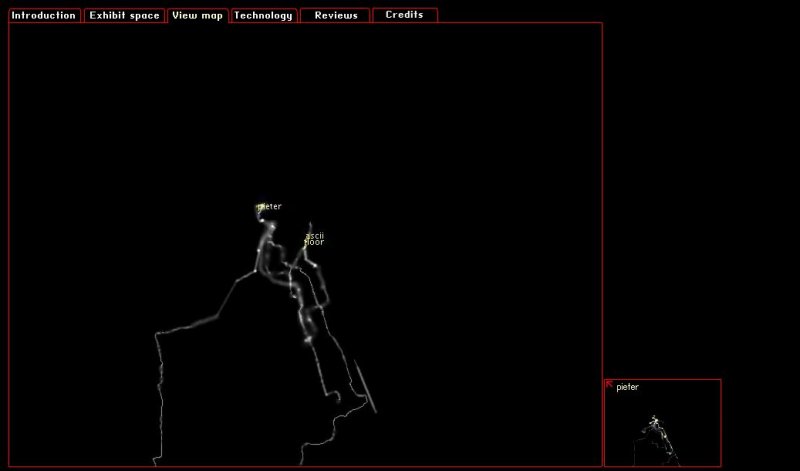 More frequently traveled sections of  the city were more brightly lit up than the less traveled, with only individual’s patterns of movement serving as signifiers of streets and roads. The main difference in these two projects is the activity of the participants after their motion has been tracked. In Amsterdam RealTime, the motion of the subjects remains visible even after their experimental period has elapsed, leaving a kinetic residue of sorts. In this way, the work was quite cumulative, unlike MILKproject, which approaches its subjects in isolation. However, in Amsterdam RealTime, the participants were never asked to react to the map or the pattern of their movements, one of the main laments of the artists, rendering it a more sterile work on the whole than MILKproject.

In a way, MILKproject acts as a piece that aims to doubly reproduce an existing piece of art. However, unlike many reproductions, which aim to reproduce or pervert more traditional art mediums such as painting or sculpture, MILKproject considers the actual motion of its participants to be an original artwork. Going off of this analogy, there are two “translations” in play: an initial technological reproduction of the motion in the form of GPS data and a second human reproduction of the GPS data in the form of the individual’s reaction to their own movement patterns. Polak and van Bekkum are attempting to discern what is lost in these reproductions, as by definition, they cannot be flawless. In his 1934 writing, The Work of Art in the Age of Its Technological Reproducibility, Walter Benjamin expounds on the shortcomings of even the most perfect reproduction, claiming “one thing is lacking: the here and now of the work of art – its unique existence in a particular place.” [4] Though Walter Benjamin was referring to the reproduction of more conventional forms of art, this one lacking element, context, is applicable to MILKproject. As with a medium such as painting, where the context exists as an amalgamation of the physical history of the piece, the reasons for creating the piece, and change of ownership, to name a few elements, the context of locative art includes such elements as the reasons for motion, the physical surroundings that envelope the participant, and even the emotions of the participant. These are all lost in the translation (or technological reproduction) from the human language of motion to the machine language of GPS data. However, Polak and van Bekkum introduce a second translation in order to explore how much can be reproduced in human language form. By allowing the artistic participants to react to their own “reproduced” artworks, Polak and van Bekkum are turning Walter Benjamin’s ideal of imperfect replication on its head and attempting to reverse the stripping of context. It’s these final reflections by the participants in MILKproject that explores what seems to be the main theme of the project; the attempt to discern any semblance of humanity from location.

In most of the interviews conducted by the artists with the participants of the study, it becomes evident that locative data is more evocative than one might initially think. Though the blurry backgrounds of the GPS playback screen do not offer much context for the subjects, the oft-scattered dot patterns are in most cases enough for the individuals to recall general patterns of movement or tasks. For example, the farmer Zaiga Tremaine, upon seeing her dot travel repeatedly in a rectangle exclaims, “There I was mowing the grass! All the time at the same spot!” [5] 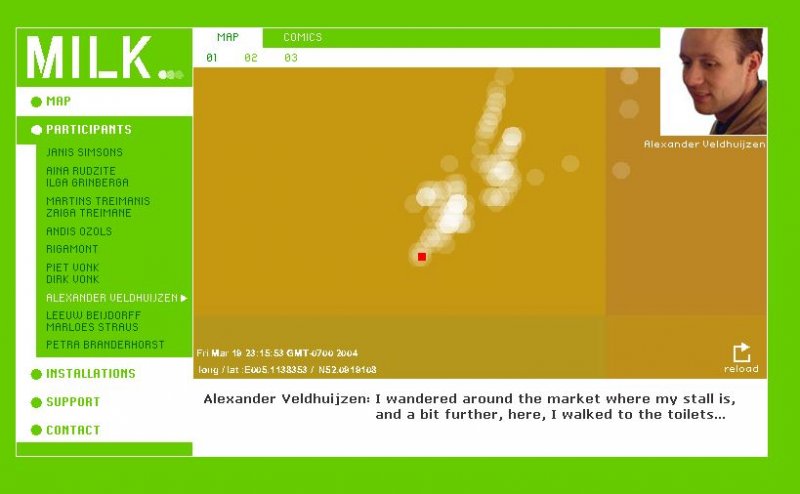 Not only is she remembering the corresponding task in regards to her location, but Zaiga is making observations about her life based solely on locative data. Similarly, although he notes that he cannot “remember every step, like that,” the salesman Alexander Veldhuijzen can remember details that seem quite incidental, such as wandering to the toilets or driving slowly around a roundabout. [5] Ultimately, what these interviews all represent is the inability to completely drain motion of the human experiences it’s tied to. MILKproject serves to illustrate the inherent link between location, motion, and humanity, which is stronger than one might presume.

An additional locative artwork that examines the connection between emotion and location is Christian Nold’s Bio Mapping. This project operates through the measurement of Galvanic Skin Response, “a simple indicator of emotional arousal”, as individuals move through a space, culminating in the creation of so-called Emotion Maps. [6] Bio Mapping, even more explicitly than MILKproject, aims to explore the inherent connection between emotion and location. However, in Bio Mapping, the operational roles are switched. The emotional response is measured in technological fashion, while the location is the factor that is more subjective. However, judging by the variance of GSR displayed on the example Emotion Map (height of red bar denotes degree of emotional response at a certain location), there is a distinct bond between human emotion and position, a sentiment echoed by Polak and van Bekkum in MILKproject. The combination of these projects (along with Polak and van Bekkum’s previous work Amsterdam RealTime) raises an interesting question that neither of these works can answer in isolation: how do people alter their movement patterns based on their emotional reactions to certain locations? It would be intriguing to see a synthesis of the ideals of these two projects. While Amsterdam RealTime and MILKproject simply pick up motion and direction based mostly on necessity (i.e. people traveling to work or performing their work, in the case of MILKproject), Bio Mapping picks up all location data simultaneously. In Bio Mapping, there is no indication of travel paths or frequency of travel. A combination of the GSR tracking system with the real-time locative mapping of Polak and van Bekkum’s works would illuminate the full human element of motion, incorporating physical context as well. 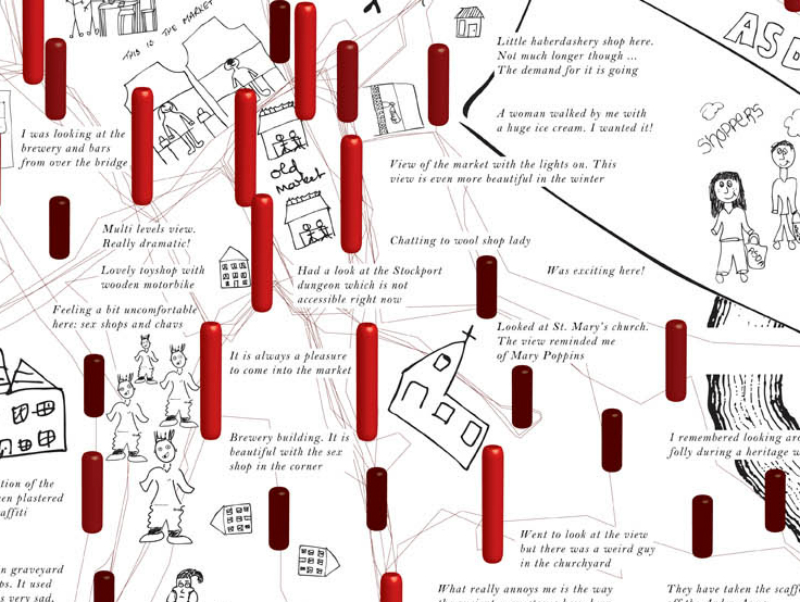 [4] Benjamin, Walter The Work of Art in the Age of Its Technological Reproducibility, 1934. 21.