Roy Ascott’s Aspects of Gaia (1989) combined the disembodied experience of telematics and cyberspace with the corporeal experience of concrete reality in physical space.  In this regard, it formed a vital link between the “pioneer days” and subsequent forms of Telematic Art that have incorporated hybrid technological media.  Aspects of Gaia brought together a global network of telematic participators who collaborated in the creation and transformation of texts and images related to British chemist James Lovelock’s “Gaia Hypothesis.”  This holistic theory suggested that the Earth (Gaia) is a unified living organism, and that climate, atmosphere, geography, plants and animals have co-developed in a way that sustains the vitality of the planet.[1] Participators could access and contribute information to a global flow of data via several interfaces, and on three levels of the Brucknerhaus (the work’s central site at the Ars Electronica festival in Linz, Austria).  What emerged was a portrait of the Earth “seen from a multiplicity of spiritual, scientific, cultural, and mythological perspectives.”[2]

On the upper level of the Brucknerhaus, a large horizontal screen purposely conflated the conventional vertical orientation of a computer monitor, and allowed viewers to gaze down on the data-stream of images and texts contributed remotely from all over the world.  (This bird’s eye view is related to the horizontal working relationship between artist and the artwork that influenced Ascott’s cybernetic works of the 1960s and 1970s.)  On the lower level, horizontal computer screens were set into what Ascott referred to as “information bars,” metaphorical cocktail lounges in which the consumption of data was intended to result in greater clarity of mind, rather than an alcohol-induced stupor.  The networked images that appeared in the information bars could be altered by either acoustic sensors, which responded to the sounds of the users, or by a computer mouse on the counter. 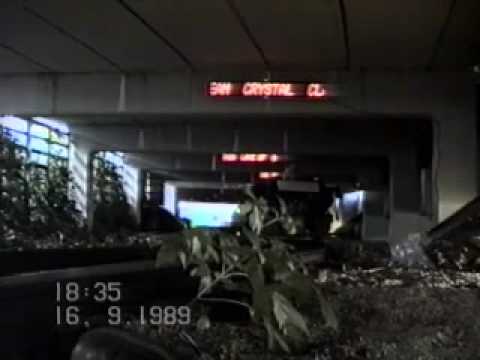 In the dark, exterior space below the Brucknerhaus, viewers could ride a trolley (also in a horizontal position), which drove past LED screens that flashed messages about Gaia.  The viewer became physically engaged in an experience that conveyed ideas about the emergent quality of telematic consciousness as it relates to the Earth as a living organism.  As Ascott described in his essay, “Is There Love in the Telematic Embrace?” (1990), the elements of the work co-evolved like Gaia, such that distinctions between artist, viewer, and artwork, nature (Earth) and culture (technology), became blurred as they were united in the unfolding duration of their harmoniously negotiated, mutual self-creation.

[2] Roy Ascott, “Is There Love in the Telematic Embrace” Art Journal, 1990. See http://telematic.walkerart.org/overview/overview_ascott.html

Excerpted from Edward A. Shanken, “From Cybernetics to Telematics: The Art, Pedagogy, and Theory of Roy Ascott,” in Roy Ascott, Telematic Embrace: Visionary Theories of Art, Technology, and Consciousness, Edward A. Shanken, ed.  Berkeley: University of California Press, 2001.  See http://www.ucpress.edu/books/pages/8867.php