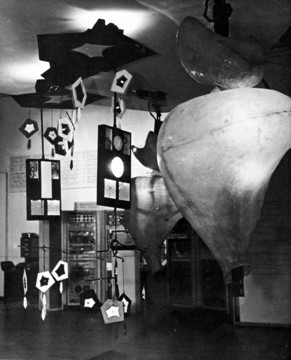 The English cyberneticist Gordon Pask conceived the Colloquy of Mobiles for the 1968 exhibition Cybernetic Serendipity held at the ICA in London. It was a reactive, educable, computer-based system composed of five mobiles. By way of light and sound, the rotating elements suspended from the ceiling communicated with each other, independent of external influences. Using flashlights and mirrors, the people at the exhibition could nevertheless take part in the conversation between the machines. With this installation, Pask brought to a conclusion his idea for an «aesthetic potential environment».

To give significance to the communication between the machines, Park designed the «Colloquy of Mobiles» as a social system. At the same time, the form of communication that he conceived referred unmistakably to a sexual analogy: hung from the ceiling were two «males» and three «females». After a phase of inactivity, the females (made of fiberglass) began to glow more intensely and the three males emitted a ray of light. When the ray of light struck the mirror inside the female mobile’s structure, by way of rotating the mirror, she tried deflecting the ray back at the free-hanging light sensors above and below the male’s aluminum body. The goal of communicating was to achieve this moment of satisfaction, and the mobiles learned to optimize their behavior to the point where this state could be reached with the least possible use of energy. With the help of flashlights and mirrors, the exhibition visitors could assume the roles of the mobiles and influence the learning process.

article by Margit Rosen on http://www.medienkunstnetz.de/works/colloquy-of-mobiles/