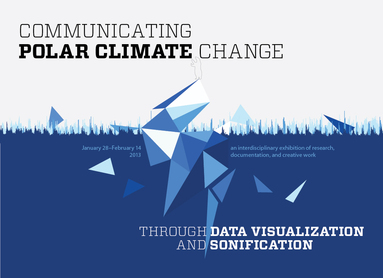 THE POLARSEEDS PROJECT: COMMUNICATING GREENLAND MELTING THROUGH VISUALIZATION AND SONIFICATION

Marco Tedesco, associate professor of earth and atmospheric sciences at the City College of New York, noted the beauty of climate science, such as flooding, cloud structure, and melting ice. To make climate science more attractive, he and his colleagues have jointly developed a research project called "Polarseeds" to present the diverse art of climate science through visual arts, music, and games.[1] 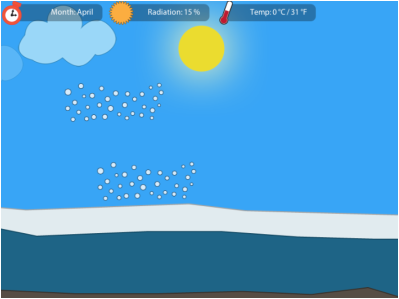 Goals of the game

For observers to communicate how the effect of albedo can cause snow and ice to melt. The artists create a game located in a public space & whose mechanics serve as an allegory of the difficulties of addressing climate change, and the game does not have an ending. This game allows individual player can only make a small contribution to the progress of the game overall. 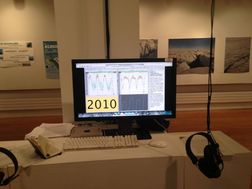 The development of art is intertwined with the progress of science. The integration and innovation of art and science is an essential embodiment of the scientific concept of evolution in cultural construction. It is also an important part of the contemporary world cultural construction. It is not only the support of all kinds of original designs but also the development of creative industries. This project by a group of scientists professional and young artist demonstrated a successful case of multidisciplinary cooperation.

Artists composed different sounds for different eras to document the climate and the ice melting data. For example, the lower tones of a droning chord become increasingly accentuated as surface reflectivity decreases (darker, lower albedo values).  A greater range of frequencies at both ends of the spectrum is also progressively allowed to pass through hi & lo-pass filters as albedo values decline.  Low frequencies are equated with dark ice. 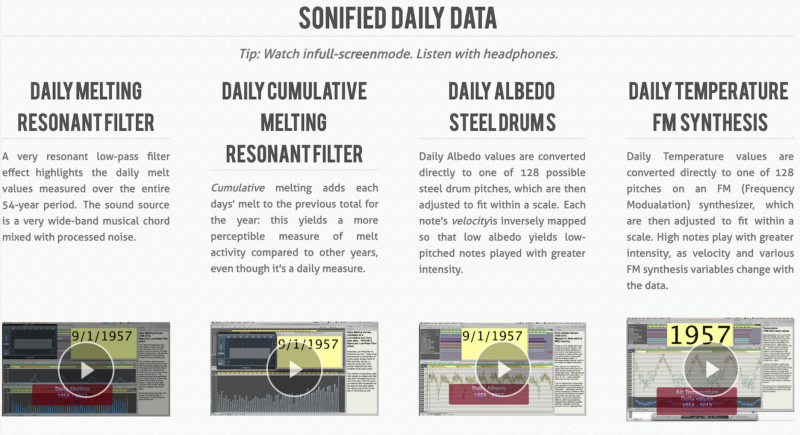 At the exhibit, many modifications of the model outputs were available at computer stations together with the explanation of the different approaches undertaken to generate them. Large aerial photos of supraglacial streams and lakes over Greenland were exhibited together with infographics addressing some of the causes and implications of melting. Videos showing either footage of melting features or the impact of albedo on melting (through ad hoc experiments carried out in the laboratory and filmed for the exhibit) were also exhibited. Lastly, the visitors had the opportunity to play an interactive web game developed for the project in which they had to balance the number of clouds, solar radiation, rain, and snow to keep the Greenland ice sheet from melting completely and flood New York City.[2]

Very interesting article! I would love to see the game in action with some gameplay though, so I can get a better idea of how the game is meant to be played. -Hyperactivity