"In 1936, Walker Evans photographed the Burroughs, a family of sharecroppers in Depression era Alabama. In 1979, in Sherrie Levine rephotographed Walker Evans' photographs from the exhibition catalog First and Last. In 2001, Michael Mandiberg scanned these same photographs, and created AfterWalkerEvans.com and AfterSherrieLevine.com to facilitate their dissemination as a comment on how we come to know information in this burgeoning digital age." [1] Though Sherrie Levine 's photographs of Walker Evans' and Mandierg's scans of the photographs were not originals, they are still all the same images just with loss of the aura of the original, for some viewers. 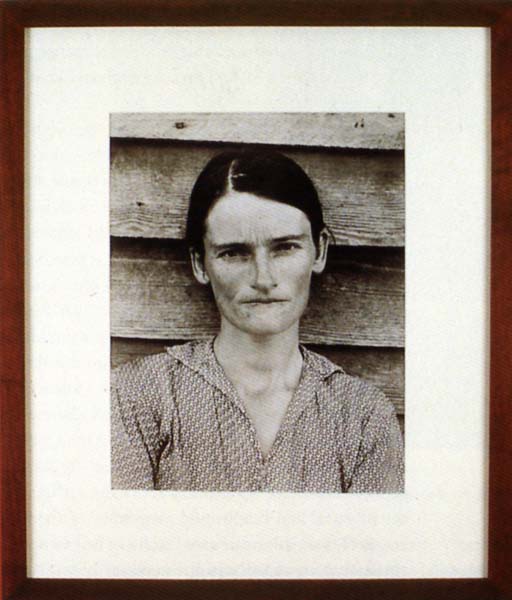 Below is a screen shot of AfterSherrieLevine.com Edward Shanken discusses this work in detail: "Upping the ante, in 2001 artist Michael Mandiberg created the twin Websites, AfterWalkerEvans.com and AfterSherrieLevine.com (2001), offering free downloads of high- resolution digital files of the twenty-five Evans images that Levine re-photographed. Each site contains the same image files, distinguished only by their titles, which correspond to the images’ Website address or Uniform Resource Locator (URL). After downloading the desired image and printing and framing it according to instructions on the Website, one may sign a downloadable certificate of authenticity that declares it to be an authentic work of art by Mandiberg. Although it may not have the cache of an ‘original’ work by Evans or Levine, neither does it carry the price-tag. While Levine’s work and the artworld discourses surrounding it intended to ring the death knell of originality, with few exceptions, the critics who chanted this characteristic mantra of post-modern art and theory failed to address how concurrent developments in electronic art, such as Kriesche’s, offered equally potent critiques of originality, authenticity, institutions and cultural hegemony. As Margot Lovejoy has pointed out, ‘Electronic media challenge older [modernist] modes of representation. New media have created postmodern conditions and have changed the way art itself is viewed." [2]

This work is still continually up for debate as whether it is the good side or bad side of the sword. The fact that it can be viewed and even downloaded and then printed out as an original Mandiberg photograph is the good side of the sword. The bad side however, is that the photograph of Ms.Burroughs was not originally taken and created in the mind of Mandiberg, that aspect will always belong to Walker Evans.

Reference this posting for more information on reproduction of fine art images: http://artelectronicmedia.com/artwork/migrant-mother-history-and-reproduction-of-art