Menu
Search
Login
Esther Polak’s art project NomadicMILK, 2009, shadows two different aspects of the dairy economy in Nigeria. The artist spent the early months of 2009 in the deserts of Nigeria following both the paths of those in charge of the production of the milk, the cow herder, and those in charge of the distribution of the milk, a truck driver. Through visual and GPS recording of both subjects, Polak’s NomadicMILK persuades the observer to redefine new relationships between the environment and technology.

Interesting enough, Polak introduced a GPS robot to the nomadic cow herders of Nigeria during her data collection. In one particular clip of NomadicMILK this small robot retraced the herder’s path with sand. Amazed at the technology, the herder facilitated a conversation. Polak remarked that she was fixated “on how people see their own tracks and how they react with that. When people see their own track, they see part of their life, part of their identity.” [1] Polak is not intrigued by GPS itself, but rather an individuals reaction to their own daily movements and migrations. Such movements that one would have ordinarily looked over. 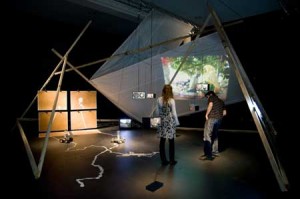 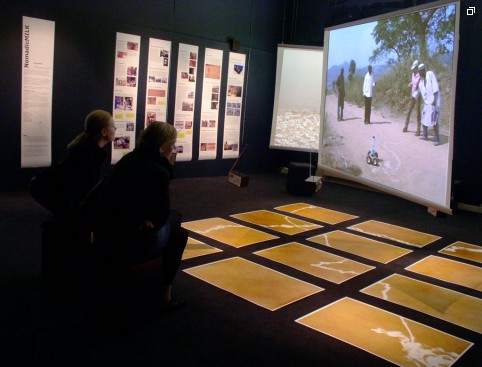 Nomadic MILK consists of audiovisual clips depicting the day-to-day duties of both subjects, the retraced GPS prints, and the robot aforementioned. However, the concept of the art piece lies in the relationship between the numerous mediums.  Through the dissection of Nomadic MILK one can see that the project doesn’t comment on the diary industry in Nigeria. But, rather houses a narration regarding the interaction between technology and the environment. Through this amalgamation of three different mediums between two different subjects, the observer sees two different depictions of one reality. Upon entering the exhibit, the onlooker is plagued with these coinciding relationships between the abstract and the existing, between a rural and a global setting, and finally between technology and simplicity.

Around the world, artists just like Polak are playing around with the visualization of data, transfiguring these abstract figures into interactive physical exhibits in new and innovative ways. Through a new medium of representation, artists enable the data to take on a new meaning and have a larger resonance within the onlooker. In collaborative effort Syver Lauritzen and Erik Haugen literally color their data in their interactive piece MONOLITT, 2014.  An unsoiled white pedestal takes “crowdsourced sentimental analytics” and transfigures these emotions into a 3D painting of data illustration.[2]  As residents of the city Oslo express their emotions through twitter, the structure exudes a color in correlation with a corresponding sentiment. A positive tweet such as “feeling good” would excrete pink paint upon the once spotless pedestal. Upon a tweet declaring a sense of annoyance, black paint would seep and trickle upon the structure. Various emotions are harmonized with an array of hues, coating and smearing the structure with the city’s emotions.

Albeit in different and unusual ways Esther Polak and the collaborative pair Syver Lauritzen and Erik Haugen ingeniously managed to create an art experiment that takes notice of the relationships born from this entanglement between the environment and today’s technology. Edward Shaken stated that in data-filing “its visualization, or any of the 2D or 3D prints that give the work a concrete physical presence” [3] Both MONOLITT and Nomadic MILK gather data through a coded form and represent this information through an interactive and electronic medium. Therefore, allowing the observer to comprehend the information through a new perspective and with a more powerful reverberation.