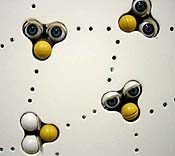 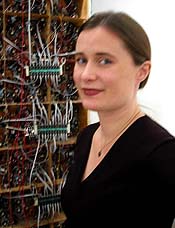 Software designer Steve Gray and artist Kelly Heaton created a very unique experience with children’s old toys, called the Reflection Loop: The pool. [1] Heaton became very familiar with analog electrical engineering in the late 90’s, which ignited the spark to creating the remainder of her work. The way it works is simple, but the ideas behind her work have great meaning. The basis of this work is the collection of hundreds of the 1998 world famous toy, Furby, and created an interesting, interactive work of art. These Furbys are disassembled and striped down to the basic circuit board and the face of the toy. All that truly remains from the original toy form was the eyes, mouth, and inner workings of the face.

[2] The faces are placed in a custom cut wall, assembled together with a unit of multiple sensors, motors, and audio triggering. The Furbys' faces are not all turned the same way. They are scattered equally across the wall, and presented with multiple holes for sensors to pick up the users movement. As the user interacts with the wall of Furbys, or know as the Reflective Loop, the sensors command the Furbys to follow the path of the user and interacts with them using sound, and visuals. If you wave your hand across the face of a Furby, The eyes will open, and some sounds may occur.

This notion of having an immersive, interactive experience with the view was exactly what Heaton had in mind for her work of art. [3] Taking the users/viewers attention and allowing them, not only to interact with the piece, but also be apart of the art form. Without the user’s interacting with the Furby covered wall, there would be no motion or change to the piece. It would simply be a static structure. Most of Heaton’s other work shares this same theory. She also is seen using a lot of other children’s toys implemented into her work. [4] For example, some of her other famous works, The Surrogate and the N-Trophy employment (seen above) the famous Elmo and allows the audience to interact with motion, and human forms. The Reflection Loop reminds me of works by Marita Steina. Her work, Allvision, produced in 1976, created this closed circuit video captures that allowed viewers to feel encapsulated under surveillance. [5] The entry, which includes Steina’s work, can be seen HERE.