FIVE WORDS IN BLUE NEON (above image) is the exact description of what this work displays. This glorious, florescent glow of blue neon spelling the simple phrase “FIVE WORDS IN BLUE NEON” contains a particular aura in what this work portrays.[1] With the work displayed in a brightly lit studio, the piece doesn’t have the same feel as it would if the studio was strictly lit by the blue neon sign. With the majority of the surrounding lights off, the signs seems to have the illusion of a floating phrase that embraces the viewers attention. It seems to pull you in to the simple phrase and makes you wonder if there is anything else behind the modest work besides the brightly lit phrase. This specific work has been argued to coincide with the same “respect” as a still life painting, a sculpture, or any other contemporary art form. The simple phrase contains, light, contrast, and a variation of hue and saturation similar to other art works, but has a more modern twist. When Joseph Kosuth created this work in 1969, he wanted to branch out beyond the canvas and create something that can be as attention grabbing as a historical painting or ageless sculpture. The idea of creating a “variation” of what is, was strongly displayed through his earlier work, One and Three Chairs. (above image)[2]  The perspective presented questions what defines art and how far it can be conveyed and expressed? 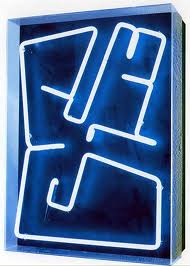 The boundaries that Kosuth pushes compares contrary to Claire Bishop’s perspective on Digitalization of Modern Art. He is expanding outside the realm of  traditional art and showing how something so embracing and beautiful as these neon forms can become. Other similar works can be found in Edward Shanken’s, Art and Electronic Media,2009. Estructura Luminica Madi “F”, (image right) by Gyula Kosice shows the same momentum of modern art forms shown by Joseph Kosuth. [3] This work by Kosice was created in 1946, quoted as “…the first to consist exclusively of unadorned neon.” I can see the inspiration that Kosuth could of embraced for this previous work by Kosice.

[2] One and Three Chairs: LINKED HERE