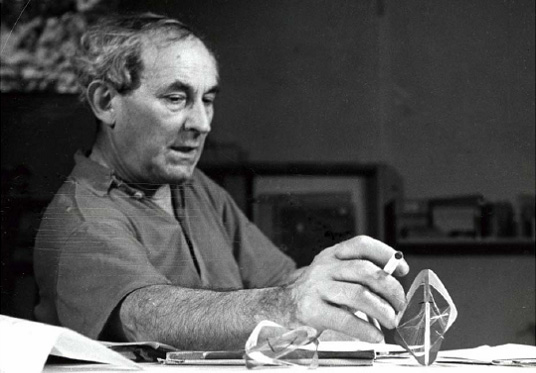 Naum Gabo KBE, born Naum Neemia Pevsner was a prominent Russian sculptor in the Constructivism movement and a pioneer of Kinetic Art. His older brother was fellow Constructivist artist Anton Pevsner; Gabo changed his name to avoid confusion with him. After the outbreak of war, he moved first to Copenhagen then Oslo with his older brother Alexei, making his first constructions under the name Naum Gabo in 1915. These earliest constructions originally in cardboard or wood were figurative such as the Head No.2 in the Tate collection. He moved back to Russia in 1917, to become involved in politics and art spending five years in Moscow with Antoine Pevsner, his younger brother. Gabo contributed to the Agit-prop open air exhibitions and taught at ‘VKhUTEMAS’ the Higher Art and Technical Workshop, with Tatlin, Kandinsky and Rodchenko. During this period the reliefs and construction became more geometric and Gabo began to experiment with kinetic sculpture though the majority of the work was lost or destroyed. Gabo’s designs had become increasingly monumental but there was little opportunity to apply them commenting ‘It was the height of civil war, hunger and disorder in Russia. To find any part of machinery … was next to impossible’. Gabo wrote and issued jointly with Antoine Pevsner in August 1920 a ‘Realistic Manifesto’ proclaiming the tenets of pure Constructivism – the first time that the term was used. In the manifesto Gabo criticised Cubism and Futurism as not becoming fully abstract arts and stated that the spiritual experience was the root of artistic production. Gabo and Pevsner promoted the manifesto by staging an exhibition on a bandstand on Tverskoy Boulevard in Moscow and posted the manifesto on hoardings around the city. In Germany Gabo came into contact with the artists of the de Stijl and taught at the Bauhaus in 1928. During this period he realised a design for a fountain in Dresden (since destroyed). Gabo and Antoine Pevsner had a joint exhibition at the Galerie Percier, Paris in 1924 and the pair designed the set and costumes for Diaghilev’s ballet La Chatte (1926) that toured to Paris and London. To escape the rise of the Nazis in Germany the pair stayed in Paris in 1932-5 as members of the Abstraction-Creation group with Piet Mondrian.

The essence of Gabo’s art was the exploration of space which he believed could be done without having to depict mass. His earliest constructions such as Head No.2 were formal experiments in depicting the volume of a figure without carrying its mass. Gabo’s other concern as described in the ‘Realist Manifesto’ was that art needed to exist actively in four dimensions including time. Gabo’s formative years were in Munich, where he was inspired by and actively participated in the artistic, scientific, and philosophical debates of the early years of the 20th century. Because of his involvement in these intellectual debates, Gabo became a leading figure in Moscow’s avante garde, in post-Revolution Russia. It was in Munich that Gabo attended the lectures of art historian Heinrich Wolfflin and gained knowledge of the ideas of Einstein and his fellow innovators of scientific theory, as well as the philosopher Henri Bergson. As a student of medicine, natural science and engineering, his understanding of the order present in the natural world mystically links all creation in the universe. Just before the onset of the First World War in 1914, Gabo discovered contemporary art, by reading Kandinsky’s Concerning the Spiritual in Art, which asserted the principles of abstract art. Gabo’s vision is imaginative and passionate, over the years his exhibitions have generated immense enthusiasm because of the emotional power present in his sculpture. Gabo said of his own sculpture that he himself was “making images to communicate my feelings of the world.” In his work, Gabo used time and space as construction elements and in them solid matter unfolds and becomes beautifully surreal and otherworldly. His sculptures initiate a connection between what is tangible and intangible, between what is simplistic in its reality and the unlimited possibilities of intuitive imagination. Imaginative as Gabo was, his practicality lent itself to the conception and production of his works. He devised systems of construction which were not only used for his elegantly elaborate sculptures but were viable for architecture as well. He was also innovative in his works, using a wide variety of materials including the earliest plastics, fishing line, bronze, sheets of Perspex, and boulders. He sometimes even used motors to move the sculpture. London’s South Bank Centre is the location of the largest collection of Gabo’s sculpture. Caroline Collier, the gallery exhibition organizer there and an authority on Gabo’s work said, “The real stuff of Gabo’s art is not his physical materials, but his perception of space, time and movement. In the calmness at the ‘still centre’ of even his smallest works, we sense the vastness of space, the enormity of his conception, time as continuous growth.” In fact, the element of movement in Gabo’s sculpture is connected to a strong rhythm, more implicit and deeper than the chaotic patterns of life itself. The exactness of form leads the viewer to imagine journeying into, through, over and around his sculptures. Gabo wrote his Realistic Manifesto, in which he ascribed his philosophy for his constructive art and his joy at the opportunities opened up by the Revolution in Russia. Gabo saw the Revolution as the beginning of a renewal of human values. Five thousand copies of the manifesto tract were displayed in Moscow streets in 1920. Gabo had lived through a revolution and two world wars; he was also Jewish and had fled Nazi Germany. Gabo’s acute awareness of turmoil sought out solace in the peacefulness that was so fully realized in his “ideal” art forms. It was in his sculpture that he evaded all the chaos, violence, and despair he had survived. Gabo chose to look past all that was dark in his life, creating sculptures that though fragile are balanced so as to give us a sense of the constructions delicately holding turmoil at bay.