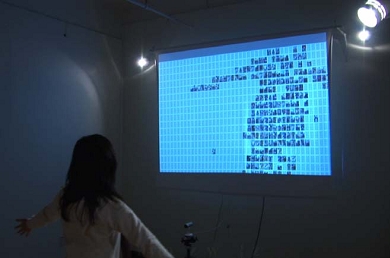 “In this project, the main theme is the use of tarot cards as a visual. My tarot deck has been designed and reinterpreted in a modern photomontage style. Fot these photomontage tarot cards, i have taken pictures of models to represent the characters in the tarot card deck, and photos of New York for the background.” [1]

“The inspiration for this work comes from the book, “The Castle of Crossed Destinies” by Italo Calvino [link]. It is said that we would like to be able to see our destinies. In many parts of the world, tarot cards are used as a tool to see into the future. Even though some parts of our destiny are pre-determined, in my opinion, we can manipulate other parts. Moreover, one person’s destiny is mixed with the destiny of others. We can make a new destiny as we can change the tarot by our own movement.” [1]

Your Destiny uses a camera to feed the input into a computer, which in turn processes the image data into cells, detecting and processing the color value of each cell. Each cell is assigned a random tarot card. Differences in the color value of the cell determine whether a card will be flipped or not. The data is sent to the projector and shown as tarot cards on the screen. A similar technique is used in Daniel Rozin’s Wooden Mirror (1999, see linked entry) [3]. The process that is used for these artworks was allready envisioned by Myron Krueger in 1977. In Responsive Environments he describes it as follows: “The environments described suggest a new art medium based on commitment to real-time interaction between men and machines. The medium is comprised of sensing [motion tracking], display [projection] and control systems [computer software]. It accepts inputs from or about the participant and then outputs in a way he can recognize as corresponding to his behavior. The relationship between inputs and outputs is arbitrary and variable, allowing the artist to intervene between the participants’ actions and the results perceived.” [4] In the case of Your Destiny, Kwon intervenes by converting the input into cells and assigning them with tarot cards.