Gillette and Schneider’s Wipe Cycle confused, intrigued and excited viewers who were surprised to find themselves on television screens where commercial programming or taped images of other people had appeared just prior to their own. By screening live and recorded, commercial and non-commercial images on a bank of nine video monitors, the piece was able to introduce uncertainty into a medium that was known for its direct address and, in early surveillance uses, mirror-like properties. The time-delays, live and recorded elements of the piece were occasionally ‘wiped’ to make the information overload that the viewer was experiencing more distinct. By incorporating and inculcating viewers in the medium of television and surveillance, Wipe Cycle is able to resituate their relation to commercial television and surveillance cameras more specifically, and mass culture more generally. What was before seen a heavily centralized, top-down mass medium here becomes one that is participatory and complex. Wipe Cycle resets viewer expectations of the medium of television and encourages critique of a formerly unassailable form.[1] 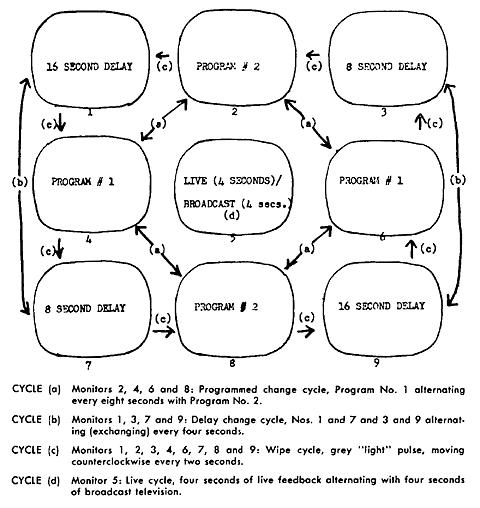 “In the exhibition «TV as a Creative Medium,» [at the Howard Wise Gallery, New York, 1969] the installation was constructed before the elevator. So each visitor was immediately confronted with his or her own image. But the monitors also showed two video tapes and a television program. The installation, which made visitors a part of the information, was rigged in a highly complicated fashion: in four cycles, images wandered from one monitor to the other delayed by eight or sixteen seconds, while counter-clockwise a gray light impulse wiped out all the images every two seconds.”[2]

In a 1969 interview with Jud Yalkut, Gillette and Schneider describe Wipe Cycle as “a television mural designed to engage and integrate the viewer’s television ‘image’ at three separate points in time and five exchanging points in space.” Gillette further pointed out that “it was an attempt to demonstrate that you’re as much a piece of information as tomorrow morning’s headlines” and that “the satellite which is you is incorporated into the thing which is being sent back to the satellite. In other words, rearranging one’s experience of information reception.” In their metacritical investigation of how technology had the ability to ‘rearrange one’s experience of information’, Gillette and Schneider deployed very same the technology they were critiquing in order to provide insights into the relationship between humans and electronic media.[3]