In Warp, Steina makes use of her two favourite features of the Image/ine software, written by Tom Demeyer at STEIM (a center for the development of instruments and tools for performers in the electronic performance arts) in Amsterdam in 1997. The first feature – ‘warp’ – is a time delay software, which scans one line at the time, leaving the rest of the image motionless. With the second feature – ‘slit scan’ – a point or line in a continuously moving image is captured and streamed forward. The capturing line can be at the sides, middle, top or bottom as seen in the video.  This latter effect was first seen in Stanley Kubrick’s 2001: A Space Odyssey (1968).

Image/ine was developed by Demeyer in collaboration with Steina. It was the first piece of software for normal desktop computers that allowed users to manipulate uncompressed video in real time. Limited, at the time, to 320×240 pixels at some 10 frames per second, it nonetheless proved a point: real time video manipulation was possible.[1] 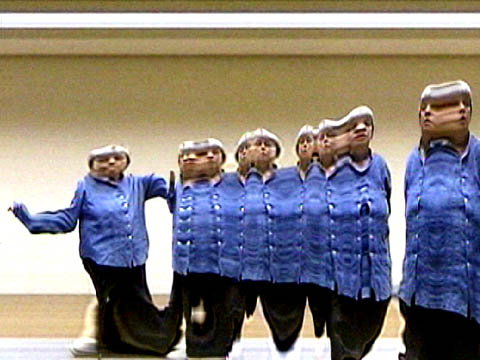 Warp is a combination of video art and performance. In it, Steina departs from what is normally considered ‘space’ in video, what we see ‘in front of the camera.’ With the help of the Image/ine software, she extends visual perspective through the modulation and modification of images and through the addition of multiple layers. Steina’s image in Warp morphs continuously, through both the software effects and her natural movements. The fluctuating image reveals multiperspectival movements and a trail of sculptural forms of movement are left behind in the video.

Steina scrutinizes “the frame” and treats it like an entity of its own that has a particular behaviour of its own. “The image has spatial appearance and behaviour.” [2] As her partner Woody Vasulka stressed in 1984, “What [feedback] did to us was to give us clues to the behaviour of an electronic image (…) if you have the imagination to extend that clue into the expression, then you have material which you can learn to control.” [3] Through spatial immersion in Warp, one becomes aware of the interactions between body-machine and machine-machine and that these relationships are internal processes. What is fascinating in this work is that despite one seeing the mapping of the image in constant flux, Steina exerces complete control over her video performance. 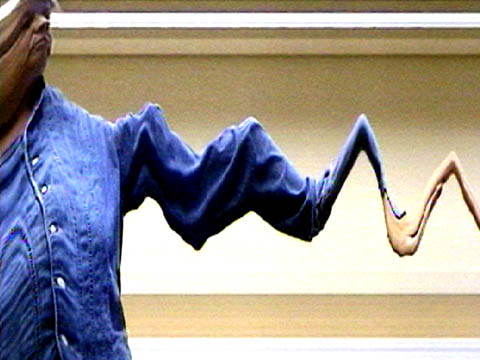 In addition, Daniel Swan, a BA Graphic Design student at Camberwell College of Arts recently shot a music video inspired by Steina’s Warp for the London based DIY band, PENS.