Amidst the busy crowds and bustling traffic, people walking in New York Times Square can easily become lost in the various sounds. But if someone truly and intently listens, he or she can hear the unique art of sound sculptor Max Neuhaus, who specializes in sound technology works, including "Sound Figure" that he made in 2007. In 1977, Neuhaus installed his artwork, Times Square, beneath the subway ventiliation on 45th and 46th street. However, despite the large radiating sound, most of the people passing by do not even notice it. The way the sounds blend into the background was part of Neuhaus’ plan. He stated that “[t]he piece isn’t meant to startle, it’s meant for people who are ready to discover.” [1] In lecture, guest speaker Joel Ong described one of his artworks in which the sounds he created reflected the stories, histories, and emotions of the hospital. In the same way, the subtle Times Square creation works with its surroundings to form a system that creates the art. Like Labyrinthitis, another art in the AEM-OC, and Yantra, an artwork in the Works section of the AEM created by James Whitney in 1950, Times Square is a sound art that combines art, sound, and technology. [2] 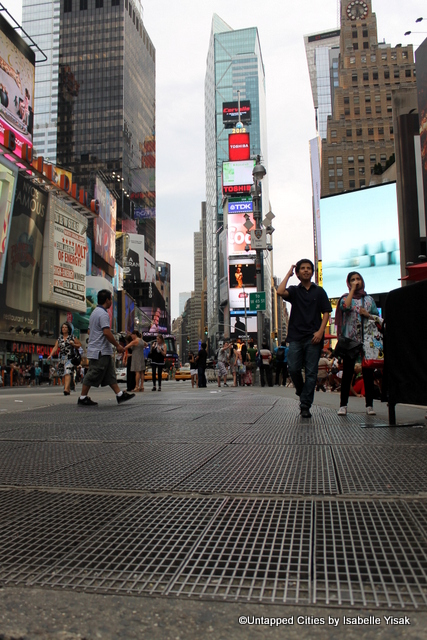 Times Square is made up of a machine that was placed underground to amplify the sounds of the subway vent chambers, so the sound varies at different locations due to the different lengths and resonances of each chamber. So this artwork relates to the theory of motion, duration, and illumination because it reveals the motion of the air traveling through the vent chambers by capturing the resonances through sound. Listening to Times Square gives a feeling of action and movement, as the sounds have different pitches. As writer Lucio Fontana wrote in “The White Manifesto” in the Documents section of the AEM, society should ask “scientists of the world, who know that art is a vital necessity of the species, to direct part of their research towards…produc[ing] sounds that permit development of four-dimensional art.” [3] Neuhaus had done well in this manner, as he helped continue the evolution of art by creating sounds that were novel in the 1970’s and are still fascinating to listen to today.