The Japanese experimental visual artist Takashi Ito’s 1982 short film Thunder tests two extremes of the fairly conventional medium of film. A five minute pulsing odyssey through an industrial architectural network, fueled by long exposure light drawings and a mechanical score that perverts both voice and glass samples, Thunder is maximal in its approach to providing audiovisual information, while boldly displaying a lack of kinetic cohesion.[1]

The entirety of the film consists of sequenced photographs, relying on the phenomenon of persistence of vision to enable the viewer to “perceive motion smoothly unfold over time.” [2] However, Ito does not seem preoccupied with simulating a realistic motion. Instead, in Thunder, he splits the frame into two distinct sections, which could be described as the static background and the dynamic foreground. The static background consists of the disembodied female figure, the only discernable living being in the film, whose machine-like gesturing becomes hypnotic by the conclusion of the short, along with the urban architecture itself. It grounds the viewer while erecting a sense of foreboding that never quite peaks. The dynamic foreground consists of the strobing blue and red lights, the long exposure light patterns, and the male figure (possibly the filmmaker himself) who controls them. 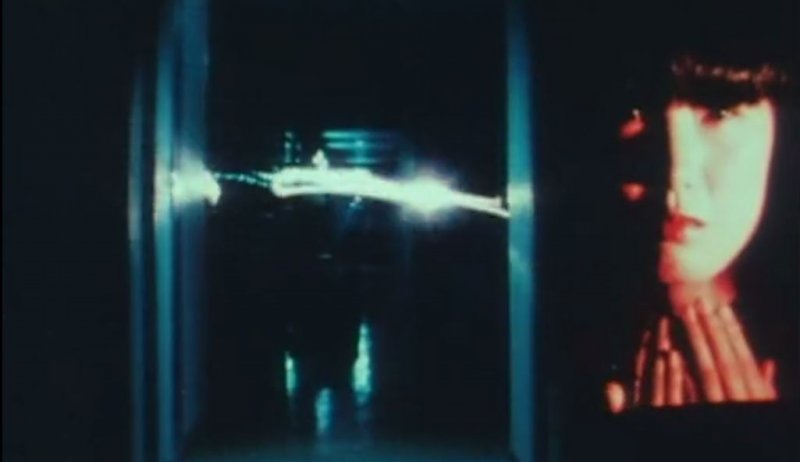 It is these foreground elements that explore the space, dancing around the edges of the architecture long enough to brighten, but not illuminate. As Laszlo Moholy-Nagy noted in The New Vision, light is “an outstanding aid in propelling kinetic sculpture, and in attaining virtual volume.” [3] Although the medium of film is quite restrictive in its voluminous capabilities, Thunder is able to harness the potential of hyperactive light to explore a background space in two dimensions. This dichotomy serves to subvert the traditional expectations of a “stop-motion film.” Instead of taking an unfilmable subject and using photographic sequencing to give the

illusion of realistic motion, Ito is taking a filmable subject and stripping it of context and coherence through incremental framing. It’s this theme of subverting expectation that may have influenced Ito to choose film as his medium for this particular work. For a work that’s so heavily focused on the use of light as a voluminously expansive medium, it’s slightly odd that Ito, whose artistic history does include light installation, opted to film this work. However, Thunder is a piece of opposites. Ito takes something filmable and uses incremental framing to distort it. In the same vein, he adopts a “flat” medium, but displays a flurry of lights to seemingly expand it into the third dimension. Perhaps the most intriguing dichotomy of all is in the film’s use of order to display disorder. Ito’s workflow is painstakingly methodical: incremental sequencing of individual photographs to emulate motion. However, the images Ito constructs are decidely frantic, bordering on chaotic. This final set of contrasting ideals further cements Thunder as a film work that attempts to explore the idealistic boundaries of the typically flat medium.

Ito’s career is saturated with works such as Thunder, which utilize photographic sequencing to pervert conventional notions of spatial awareness. One of his earliest works, Spacy, created in 1981, goes even further than Thunder in its examination of a single space. While Thunder was housed in a sprawling architectural network, Spacy is contained entirely in a dimly-lit gymnasium. This physical restriction serves to further emphasis the space through kinetic repetition. As the camera pans through infinite loops of the gymnasium, and the space shifts from a three-dimensional environment to a propped-up image due to Ito’s trick photography, the viewer begins to question the authenticity of their own perceptions. According to the filmmaker himself, the goal of Spacy and a later work entitled Box was to disturb the “awareness of space in the movement from the three-dimensional to a plane and back again.” [5] In contrast to Thunder, which operates by providing too little information about its setting, Spacy inundates the viewer with seemingly endless permutations of the same space. By the time Ito begins to toy with horizontal panning and strobe lighting near the end of Spacy, it almost comes as a welcome change, an audio-visual assault that disrupts a space that has become much too familiar over the film’s short running time. Once again, this is an example of Ito’s perversion of the “stop-motion” medium, which aims to take advantage of persistence of vision to animate the unfilmable. Spacy also differs from Thunder in its method of producing virtual volume. While Thunder adhered to the method advocated by Laszlo Moholy-Nagy, using light to expand the perceived dimensions of a space, Spacy instead relies on photographic trickery to increase the size of its space. By panning through the gymnasium in what seem to be seamless loops, Ito is perpetually adding virtual volume to the work, creating the monolithic space that one can sense through the piece. By the end of the film, the actual travel distance of the perspective camera has eclipsed (many times over) the intitial perceived volume of the space. 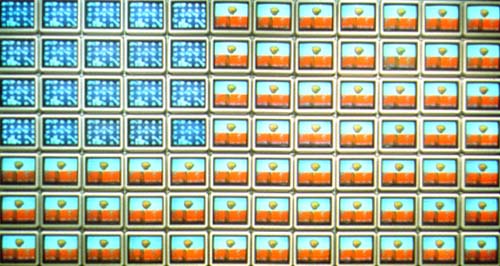 In Thunder, the structure of the piece can be thought of to consist of small frame subunits that are individually motionless and incoherent, but reveal their true intention upon sequencing. A larger-scale video installation entitled Video Flag Y (left) created by Nam June Paik addresses some of the same artistic questions as Thunder, but utilizes televisions as the small subunits that make up the whole instead of individual frames. In his installation, Paik constructs a 7 x 12 grid of television sets that display individually perplexing images, as they are edited rapidly and flicker. [6] However, when played in sequence, the series of television sets produce variations of a mass image resembling the American flag [7]. Political message aside, this installation is an experiment in corrupting the integrity of the film medium.  Like Ito in his short film, Paik abandons clear image and movement as the principal means of disseminating audio-visual information. He opts for pattern and the interplay between the small subunits in his work (the individual televisions) to relay that data instead. This is analogous to Ito’s use of a dynamic foreground to explore space through stark jump cuts and pulsing light rather than realistic persistent motion.