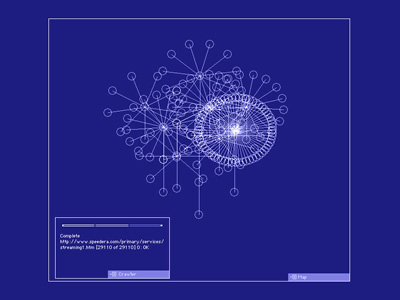 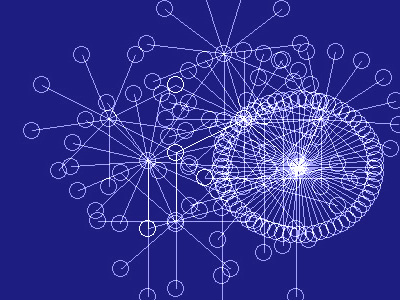 I/O/D4: The Web Stalker is a speculative software application for reading and manipulating information on the most popular portion of the Internet – the World Wide Web. As Web Browsers become increasingly more bloated and pointless, I/O/D 4: The Web Stalker gives users fast access to this media. 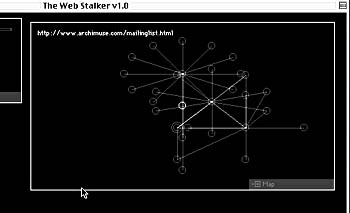 “I/O/D 4: The Web Stalker purports to be a new form of web browser that dispels with the page metaphor of traditional browsers and presents urls as a series of circular lines that are the links. I/O/D 4: The Web Stalker relies on spatial references which are both refreshing visual distractions from the html series of links that we have become accustomed to on the web.”

Interview with the makers of the Web Stalker
By Geert Lovink


Geert Lovink: ‘Everybody is a browser designer’ – but it is not everyman’s hobby to build one (yet). Where does the idea, to create one’s own browser, come from? Normally, designers are working with content and have to make it look nice. But now there is the new profession of the
‘interaction designer’. Are you one of those? Are you techno determinists, who believe that the shape of the interfaces is determining the actual information?

Matthew Fuller: Hmm, this is one of those statements along the lines of ‘Jederman ist ein kunstler’. (Joseph Beuys) These statements sound democratic, but actually have the subtext of meaning *Everyone wants to be like me – the great man!* No, not everyone is a browser designer for sure. And certainly it would be unwise to want to be like us. People should actually have aspirations right? The idea of making another piece of software to use the web with came about for a few reasons. First of all, I/O/D had been working with different ideas of interface and a general praxis around speculative reinvention of the computer anyway. Secondly, we were bored by all the hype. Thirdly, we knew it could be done, but didn’t have the skills of the knowledge to do it properly – so we had to do it. As for the normal behaviour of designers I reckon I’ll leave that part of the question for Simon or Colin to answer with a firmer grip on the handle of the knife that needs twisting. As for being techno determinists… I guess we are interested in finding this out. What comes into play using the web? The material on the URL being used, which encompasses the programs, skills and materials used to put it together as well as the specific items of data; then the actual hard infrastructure – computers, servers, telephone lines, modems and of course the software running on them, (in short, bandwidth considerations); then the software being used to access the web – a great big pile on top of which sits the Browser, terminal viewer or whatever.

All of these elements and how they mix determine to some extent the nature of the interaction. For instance, try using a web site packed full of java-scripts, frames and vrml with a browser from a couple of years back. You’ll find that the type of interaction available to you is pretty much fully determined by the technology you have. You’re locked out. On the
other hand, just looking at all of this misses out on the key piece of equipment in the relationship – the user. One of the things that drove us to make the Web Stalker was that we, and pretty much everyone else don’t really use web-sites in the way that they are suposed to be used. Whether it’s switching off gifs or blocking cookies or whatever there’s an element of street knowledge that you use to get to the stuff that you really want. We made the Web Stalker to work in the same kind of way. It’s designed to be predatory and boredom-intolerant. At the same time though, we hope that as a piece of *speculative software* it just encourages people to treat the net as a space for re-invention.

Geert Lovink: Web Stalker is showing us the backstage of the browers. Could you explain us how it actually works? What kind of code do we get to see? Is it just HTML or hidden directories of the servers? What do webmasters and sysops try to hide for us and what can we learn from it?
Web Stalker as a hackers tool for extra-governmental gangs that are trying to undermine the effeciency of global capitalism?

Simon Pope: The web stalker moves only within the limits of html space. any co-conspirators needs to be fore-armed with at least one URL which refers to an html document. give this to the ‘crawler’, and the stalker begins its process of parsing, hungrily searching for links to other html resources. initiating a ‘map’ window, opens a channel onto this process, through which urls are graphically represented as circles and links as lines. the stalker will thrive on known links and resources – as long as each html document contains a link to another html document, the stalker will live. pitch it into a netscape, microsoft, macromedia or java-only
space and it will soon perish.

Colin Green: When we began to use the stalker as our primary web-access software, we became aware of the extent to which html has become a site of commercial contention. browsers made by the two best-know players frame most peoples’ experience of the web. this is a literal framing. whatever happens within the window of explorer, for instance, is the limit of possibility. html is, after-all, a mark-up language which indicates structure and intention of a document. there is no imperative to interpret as , as there are none which demand the use of ‘forward’ or ‘back’ to define a spatial metaphor.

Matthew Fuller: We’ve had reports from users that amongst other things, ifyou use the Web Stalker on a site with extra content being added to it every few hours, such as some news services for instance, you can start to find files whilst they’re still in the queue – before the news ‘happens’.

Simon Pope: Commercial interests have tried to exploit the web by controlling the velocity of browsing. the stalker subverts this – it confounds the faux-melodrama of the click-thru by automatically making the link for you. Suspense is ridiculed and fluidity is returned to a realm
where processes of delay and damming are recognized advertising opportunities. It is here that the convention of the “web page” helps to solidify html, presenting each document as the potential apex of the user’s experience. a leaf-node rather than link.

Geert Lovink: But is the web stalker not also a bit protestant, in the sense of anti-image – pro code? HTML and the WWW are being presented to us as the big step forward for the normal user, to have an easy-to-use interface. what is so disgusting about all these fancy websites, funny graphics and sexy buttons? Isn’t the stalker a bit step back, male and hackerlike in its approach?

Matthew Fuller: The Web Stalker establishes that there are other potential cultures of use for the web. The aesthetic conventions of current Browsers are based on the discipline of Human Computer Interface Design. To describe the predelictions of this approach to interface you only have to note that the default background colour in page-construction programs is grey. Progress is marked by the incremental increase of fake drop-shadow on windows. Here, the normal user is only ever the normalised user. It’s time to mutate. For us, software must also develop some kind of relationship to beauty. This can in one sense be taken as something that only happens in
the eyes. But it is also something that happens at a level that is also profoundly interwoven with politics in the development of these potential cultures of use. It is in this sense that we call The Web Stalker ‘speculative’ software. It is not setting itself as a universal device, a
proprietary switching system for the general intelligence, but a sensorium – a mode of sensing, knowing and doing on the web that makes its propensities – and as importantly, some at least of those ‘of the web’ that were hitherto hidden – clear. Rather than taking an ascetic view we see that a key problem with the Browsers is that they don’t allow the Spew to manifest itself *enough*. This software is a call for the voluptuation of the nets and everything they connect to. As the union leader Big Bill Heywood used to say, stroking his belly and sucking on a tasty dog-shit-sized cigar: Nothing’s too good for the proletariat.