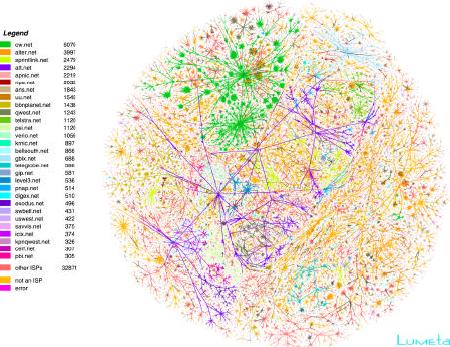 If one could actually see and visualize the virtual Internet world, what would it look like? According to the results of the Internet Mapping Project, the online web appears to be much like a complex tree of many overlapping and connecting branches. The Internet Mapping Project is a colorful digital artwork created by computer scientist Hal Burch. Burch, also the creator of the publication “Mapping and Visualizing the Internet,” used a layout algorithm to code a map that links networks in the Internet. Internet mapping, by definition, is the "study of the physical connectivity of the Internet." [1]

Upon a closer look at the image, each colored branch represents the distance from the test host, IP address, and geographic region. The endpoints, or nodes, of each branch is an Internet entity. Burch was not interested in the individual networks themselves, but wanted to create a "tree" that mapped the relationships between networks and how sites and addresses, or traceroute paths, were connected. His goal is to continue to collect data over a long period of time and add to the picture, eventually revealing the growth of the Internet. 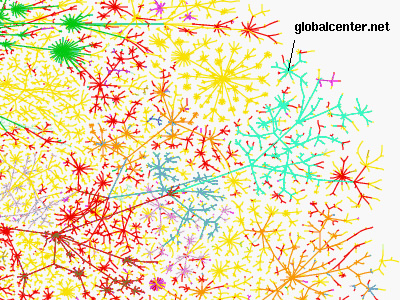 Also in the AEM documents section, writer Howard Wise wrote that some pieces of art "represent the 'programs' of artists who have chosen not to make paintings or scultpure, but to express ideas or art propositions." [4] In the same way, the Internet Mapping Project is not a painting or any type of traditional art, but instead, conveys the creator's point that the Internet is growing and becoming more prominent in today's society. Therefore, the artwork also relates to another AEM-OC artwork, Sanctum by James Coupe and Juan Pampin, because it reveals how connected society is due to social media and the Internet as a whole. When each line that ties networks together are shown together, a complicated web is formed.

Due to the artwork’s circular shape, my first impression of the piece was that it resembled a biological cell. After reading the description, however, I learned that it was actually a map, but still like a cell in that it makes up a system. A single cell is a system made up of tiny individual organelles. In the same way, each end point in the Internet Mapping Project is a network or a site, and together they create a colorful system that represents the Internet.