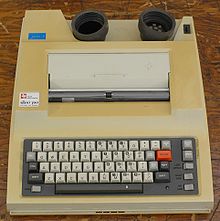 TI 700 portable computer terminal manufactured by Texas Instruments in the 1970s and 1980s. Silent 700s printed with a 5 x 7 dot-matrix heating element onto a roll of heat-sensitive paper. Some models, like this one were equipped with an integrated acoustic coupler and modem that could receive data. Ascott, Adrian, Bartlett and others used terminals like these for early telematic art projects.

Nearly a decade before the first personal computer, and over a quarter century before the advent of web-based, graphical-user-interfaces (GUIs), Ascott had already envisioned the emergence of art created interactively with computers, and artistic collaboration via telecommunications networks.

It took nearly fifteen years for the technology to evolve, and for Ascott to gain access to it, before he could implement these ideas even in a rudimentary form. In 1980, he produced the first telematic artist networking project between the US and the UK. Terminal Art, as the project was called, linked artists across the Atlantic over Jacques Vallée’s Infomedia NOTEPAD computer conferencing system. As Ascott recounted in his essay “Art and Telematics: Toward a Network Consciousness” (1984), he mail[ed] portable terminals to a group of artists in California, New York and Wales to participate in collectively generating ideas from their own studios. One of the group, Don Burgy, chose to take his terminal wherever he was visiting and log-in from there.

Though primitive by today’s standards (the text-only visual display monitors he used, in which a telephone handset was lodged in a rubber modem housing integrated with a keyboard and printer, are now collector’s items) Terminal Art was an unprecedented example of Telematic Art at the time. As distinguished from telex or electronic mail, which did not offer “logical control of the conference context or a retrievable group memory,” Vallée claimed that Notepad was, “the first commercial use of a new medium that fully utilize[d] the logical and memory abilities of the modern computer.” In addition to being able to retrieve and add to information stored in the computer’s memory, users could search the database in a directed and associative manner. As Ascott explained at the time, the group could, “tell the computer to turn up any mentions of giraffes and ice cream…” and he added that, “‘The surrealists could have a field day.'”