Peter Vogel’s 2009 Sound Wall is unique in that can be viewed as a standalone sculpture made out of hundreds of photocells and electronic circuits, but also has an interactive sound element that is activated by passing a shadow over specific circuits creating a dynamic user exclusive experience and musical composition. 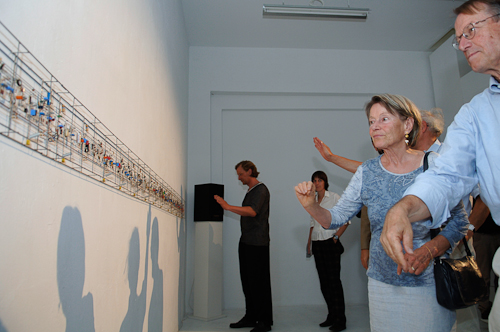 Robert Mallary states in stage six of his article on six levels of cybernetics in the AEM; a computer must make decisions, “But these decisions are made within guidelines sharply defined by the programmer” and that “He [the sculptor] may use the computer interactively and synergistically”. [2] Sound Wall and Musical-cybernetic Environment are cybernetic structures that have “decisions” programmed into them, in this case to play certain tones, but only when they are interacted with by the sculptor himself. Sound Wall in a sense can be seen as an ensemble of photocells and light sensors that wait patiently for the conductor to queue them to start performing, once his shadow passes over the sensor, the orchestra begins, and each sequential movement can be seen as traditional conducting. Vogel’s 2009 performance of Sound Wall displays a unique non-robotic cybernetic structure that interacts with an essential conductor and with such synergy as to create a beautiful compositional work.

CYSP 1, a 1956 work from Nicolas Schöffer also takes on Sound Wall’s theme of interaction with a spatial environment. Consisting of self-movable structure with sensors for light, sound, and movement, CYSP 1 used key elements of kinetic art and cybernetics, such as employing an electronic brain and having sensors that take in information from the surrounding and react to it accordingly. 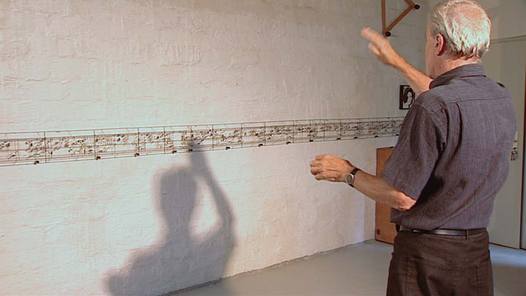 CYSP I was often showcased as a performance in which CYSP I plays a role in a ballet piece with one or more humans and interacts with them accordingly in time with music. In this sense CYSP 1 is seen as a ballet partner to a ballerina in the same way Sound Wall is an orchestra to a conductor. Both may be very different cybernetic structures; Sound Wall is stuck to a wall and needs a human to truly work, whereas CYSP 1, a robotic structure in theory can react to everything, however, both systems flesh out the concept of feedback. CYSP 1 takes in information from the system and then reacts to it according to guidelines Schöffer had programmed into it, reacting according to feedback it receives from its environment. Sound Wall, like CYSP 1, also utilizes the concept of feedback, taking in information about light and shadows and then reacting to it accordingly by playing individual sounds.

Not everyone could use Sound Wall to create beautiful music though, only when someone that knows how Sound Wall was programmed to react at certain points conducts and reveals a truly magnificent cybernetic system of control, feedback, and output. Ultimately Sound Wall is a beautiful structure on a wall, but its true potential as a cybernetic composer only becomes evident when the essential human component is added that creates the perfect symbiosis between man and machine in the form of music.