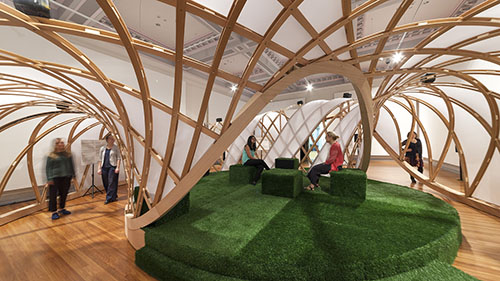 Sound Bites City is a collection of sound art from 19 sound artists from around the world at the RMIT University in Australia.  Exhibited at the RMIT University Gallery, the sound art is played through speakers that are scattered around a round physical structure that culminates with a raised, faux, grassy knoll.  This space is called the Torus.   RMIT University describes the Torus as “an exciting circular structure that has been specially designed by architects, engineers and sound designers based in RMIT’s SIAL unit to provide the best way to exhibit sound.” (RMIT link) the Torus is constructed of overlapping red cedar boughs that form a canopy over a thin fabric skin.  It is intended to be “an airy shell, a sonic tunnel, a pioneering spacio-acoustic marvel” (RMIT). 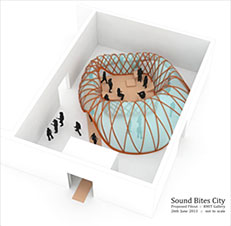 The space of sound art is designed to be interactive, in a subtle way.  The viewer/listener can wander around the exhibit, finding different spaces in which to listen to the sound or pick up headphones and have a personal experience.  Viewers can also watch the the composition of the work in progress on screens if they choose.  The work transitions from the passive act of hearing, something our brain does automatically, to listening, an act that requires thought, concentration, and interaction.

While some have said “Visuality overwhelms aurality in the cultural balance of the senses” (Kahn) this exhibit uses the visual, three dimensional space, to accompany and aid the viewer in experiencing the sound art.  RMIT Gallery director Suzanne Davies, who co curated the exhibit, has stressed the importance of the visual component in Sound Bites City, especially as sound art displayed in a gallery space.  Davies says the Tarus is “An invitation to slow down and listen-up is rare, which is what the Torus encourages us to do – sit, listen and play with our sonic imaginations”  the space is as important as the sound art pieces it contains.

Sound art is a vibrant form of new media, and a controversial one.  In John Cages, 4’33, also known as the silent piece, a player  “sits at the piano and marks off the time in three movements, all the while making no sound” (Kahn) To an unsuspecting audience member this seems ridiculous, how can one have sound art with no sound? Sound art plays with our perception of sound beyond music, incorporating silence and noise to encourage listeners to think.