Designed by Italian artist Ali Momeni and Robin Mandel with the help of artist Matthew Brackett, Smoke and Hot Air is an installation which responds to the unceasing threats aimed at Iran by more fortunate countries (the USA, UK and Israel being amongst them) in recent years. The system which controls the installation scans Google news for phrases containing “attack Iran” which are then spoken using a text to speech synthesizer. The detached, computerised voice which utters the Iran threats is magnified by a microphone, analysed and then is emitted as rhythmically corresponding smoke rings from a quartet of smoke ring makers.

As Niranjan Rajah wrote in 2000, “The near instantaneous connectivity of computer mediated communications seems to have eliminated geographical distance as all ‘points’ on the Internet exist in virtual proximity. […] The Internet is a new kind of terrain, one that transcends geography – a ‘cyber terrain,’ whose ‘frontiers’ are being ‘opened up’ in which ‘claims’ are being ‘staked.” [1] Yet, upon viewing Smoke and Hot Air, one begins to question whether the proximity and immediacy of the Internet and news services actually leads to truth or whether it is a smoke screen. Since the Internet is mainly North American it reflects the world’s most powerful countries’ opinions and their widespread hysteria surrounding terrorism, yet it does not reflect the entire globe’s view on the situation in Iran. 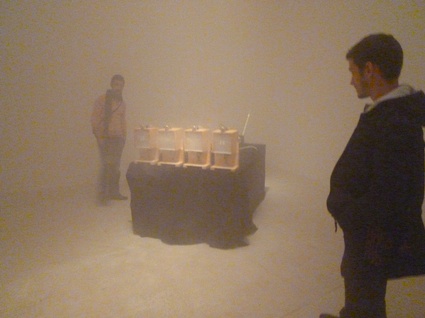 Through the artists’ artwork, the viewer is urged to reconsider his or her stance on the media landscape which frequently depicts Iran as the country making threats, instead of receiving them. However, a recent turn of events, namely the uprising after the 2009 Iranian elections, Iran has received much global support. Thus, this only proves how easily our opinions can be moulded by the media. As the threats directed at Iran are puffed out as smoke rings, the room becomes hazy and one begins to ponder whether the opinions we have on Iran are a mere smoke screen put up by the global press agencies. The smoke rings also recall smoke signals sent out as calls for help, or even mushroom cloud rings produced by nuclear weapons, the analogies are endless in this case. One begins to wonder why we have been made to see only one side of an issue so politically and culturally complex.

Antonio Muntadas’ work The File Room from 1994, explored similar issues to the creator of Smoke and Hot Air, where he delved into the history of censorship. Now a web-based archive, the public can access it to sort through cases of censorship by geographical location, date or reason for censorship. Similarly, the work also reveals why we are made to believe false truths.