Ralf Baecker’s work Rechnender Raum (Computing Space) received its name from Konrad Zuse’s book of the same title from 1967, the first book on digital physics. Zuse proposed that the universe is being computed in real time on some sort of discrete computing machinery, thus challenging the view that some physical laws are continuous by nature. The physicist focused on cellular automata as a possible substrate of the computation. 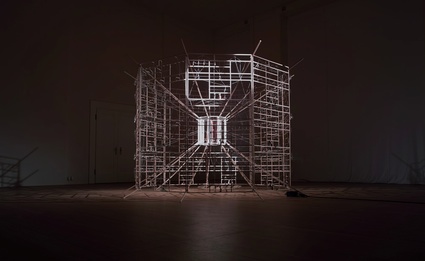 Baecker’s kinetic sculpture seems to embody what the scientist claimed at the time, it could perhaps be one of Zuse’s cellular automata; it is an artificial, functional, logically exact neural network. “Through its strict geometric and otherwise very filigree construction, the observer is able to track the whole processing logic from every viewpoint around the machine. This disclosure of the machines core is enforced by an uncommon distribution of its constructing elements: a nine angled architectural body forms a torus. In contrast to an ordinary alignment of a hidden logic and an outer user facing display its geometric basis is turned inside-out. The core of the machine, with all its computing elements, is shifted outwards on the surface, while the “display” which indicates the results of the tasks is displaced into the centre of the system. Even though the tasks and their logic run directly in front of the viewers eyes and even if one is long sinking into the interaction of the elements which is accompanied by a polyphonic but steady and reassuring buzz, it is not possible to follow the succession of the single conditions of the machine.” [1] 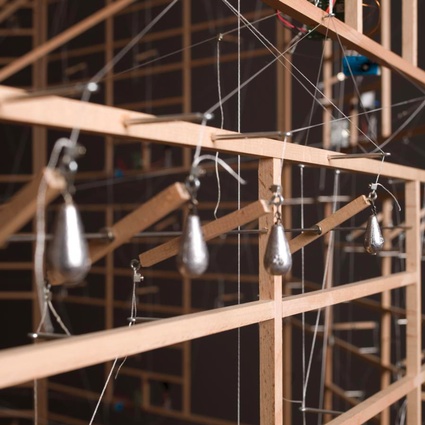 Constructed from sticks, strings and small plumb-bobs, Rechnender Raum resembles a large cage from afar. As an observer, one has the impression that it hosts a living being, as the ever-turning mechanisms of the kinetic sculpture emit insect-like hums and buzzes. As the functions of the mechanism are kept on the outside of the sculpture, one can easily follow them, yet the results of the computations enter the centre of the structure and are hidden from the observer. “So an interesting paradox appears: while the machine opens up everything it closes it at the same time, as if it has a secret.” [2] Baecker’s sculpture’s is extremely captivating through its intricate endlessness, transparency, fragility and power.

This work can also be seen as the grandchild of works such as Moholy-Nagy’s Light Space Modulator or Schoffer’s CYSP I. However, Rechnender Raum does not interact with, or extend itself into the physical environment.  Rather, it creates an internally self-propelling network of endless, balanced duration. It fulfills what Moholy-Nagy wrote in 1928, “The next stop between the equipoise is kinetic equipoise, in which the volume relationships are virtual ones, i.e., resulting mainly from the actual movement of the contours, rings, rods and other objects. Here the material is employed as a vehicle of motion. To the three dimentions of volume, a fourth – movement – (in other words, time is added).” [3]

Baecker’s Computing Space can be seen at the Netherlands Media Art Institute in Amsterdam in the Sonic Acts XIII exhibition 25 February – 2 May, 2010.