Communication and telepathy with non-human animals is a disputable subject that has not been extensively researched, but has sparked curiosity in humans for thousands of years. Other animals bring us a wealth of joy and fascination, making it no surprise that alternate ways of communication with them are being developed and explored, due to humans not being able to directly understand non-human animal vocals.

Rebecca Loyche’s Profession-Animal Communicator is an experimental video that features overlaid clips of various species of animals, including pets as well as wild animals. It is complemented with a recorded interview from a professional communicator “with over twenty years of experience, estimating that she has done over twenty-four thousand consultations to date.” [1]

Loyche explains that many of the pet and animal clips shown in her video were posts found on the Internet, and that “the Internet is overflowing with daily feeds of cute creature shenanigans, majestic wildlife footage, the ever-patient pet as family member, and examples of the personification of animals.” [2] Additionally, she filmed footage of rural animals she encounters on a regular basis. The availability and ease of finding these clips demonstrates the important role that animals play in humans’ lives, and being able to communicate with them could further strengthen our relationship with them. 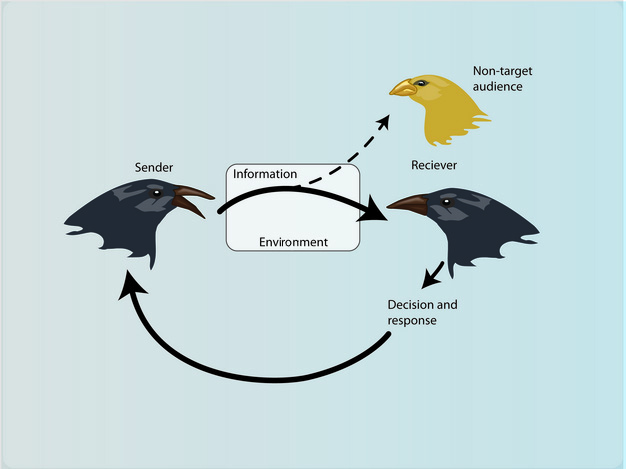 In his essay, Roy Ascott states that cybernetics is “the study of control and communication in animal and machine”, [3] two groups of beings that humans strive to learn more about. The root of cybernetics stems from receiving feedback and having achieved a goal; as pictured in the diagram, we can decipher that the sender crow is releasing information into its environment to the receiving crow as well as a non-target audience. Thus, the receiving crow is expected to make a decision and dispatch information back to the sender crow. When humans attempt to communicate with non-human animals, it is not definite that they will receive a verbal response; however, non-verbal responses are probable. Ascott also coined the term “psibernetics,” suggesting parallels and continuities between psi (psychic phenomena) and cybernetics, an apt term with respect to Loyche’s artistic investigation of animal communication.

In Loyche’s work, the communicator elaborates on the extensive number of animals she has been able to communicate with, and some of their messages to her. She states that some of the injured birds of prey have conveyed that they just wanted to be set free, while other animals in rehabilitation understood that they needed assistance in healing and were compliant with human interaction. The communicator conveys that “animals are very comfortable with telepathy and [do not] have the cultural bias that [humans] do; they’re really receptive to humans who communicate telepathically.” [4]

Through her chosen medium of video, Loyche is able to portray the animals in motion and from a first-person point of view, thus allowing the viewer to garner a more personal sentiment, rather than if the given medium had been static, such as a photograph or installation.

Based in New York and Berlin, Loyche focuses on video, photography, installation, and sound that questions our perception of everyday life. With various mediums, “she examines the relationships of power dynamics, the language of communication and the effects of creating environments.” [5]

Profession – Animal Communicator shares affinities with Eduardo Kac’s Essay Concerning Human Understanding, a cybernetic system of telematic communication between a bird and plant in remote locations [6] and Rachel Mayeri’s Primate Cinema, which attempts to produce films that are particularly entertaining to apes. [7].