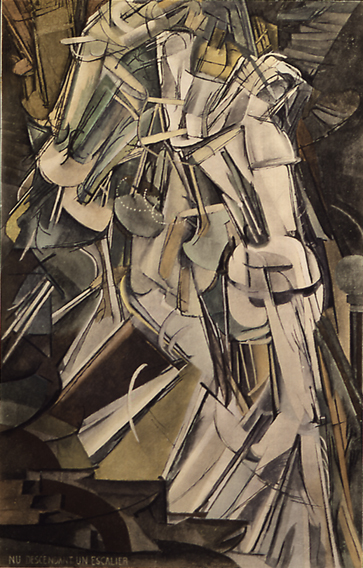 “In 1912, Duchamp painted his famous Nude Descending A Staircase, which caused a scandal at the 1913 ARMORY SHOW in New York City. In the same year he developed, with Francis PICABIA and Guillaume APOLLINAIRE, the radical and ironic ideas that independently prefigured the official founding of Dada in 1916 in Zurich.

Duchamp’s first work to provoke significant controversy was Nude Descending a Staircase (1912). The painting depicts the mechanistic motion of a nude, with superimposed facets, similar to motion pictures. It shows elements of both the fragmentation and synthesis of the Cubists, and the movement and dynamism of the Futurists.

He first submitted the piece to appear at the Cubist Salon des Indépendants, but jurist Albert Gleizes asked Duchamp’s brothers to have him voluntarily withdraw the painting, or to paint over the title that he had painted on the work and rename it something else. Duchamp’s brothers did approach him with Gleizes’request, but Duchamp quietly refused. Of the incident Duchamp later recalled, “I said nothing to my brothers. But I went immediately to the show and took my painting home in a taxi. It was really a turning point in my life, I can assure you. I saw that I would not be very much interested in groups after that.” [2]

[2]: Marcel Duchamp, from Session on the Creative Act, Convention of the American Federation of Arts, Houston, Texas, April 1957

for more information you can see: