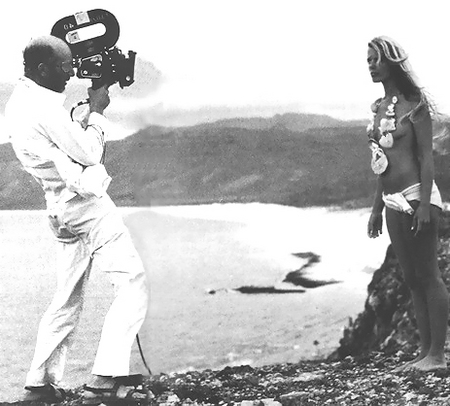 “Heilig was inspired by the Cinerama, a technique that used three cameras to project movies onto an arced widescreen, expanding the area of viewing space for the audience. In his 1955 essay, The Cinema of the Future Heilig writes that Cinerama, as well as 3-D films, which had only recently entered widespread usage, was a logical step in the evolution of art: The really exciting thing is that these new devices have clearly and dramatically revealed to everyone what painting, photography and cinema have been semiconsciously trying to do all along — portray in its full glory the visual world of man as perceived by the human eye. Heilig wanted to expand this replication of reality beyond the available senses of sight and sound to create the future cinema after which he named his essay. Heilig begins his study of the cinema of the future, not by examining the relationship between film and viewer, but by trying to learn, “how man shifts his attention normally in any situation”(1955/2002).
Heilig’s study of attention deals with which of each of the five senses are being used at any given point in an experience.Heilig also identified the various organs that were, “the building bricks, which when united create the sensual form of man’s consciousness”: the eye with 180 degrees of horizontal and 150 degrees of vertical three dimensional color view; the ear, able to discern pitch, volume, rhythm,sounds, words and music; the nose and mouth detecting odors and flavors; the skin registering temperature, pressure and texture (1955/2002).
The goal of future cinema, said Heilig, was to replicate reality for each of these senses. He advocated theaters that would make us of magnetic tape with separate tracks for each sense — the intensity of odors to be piped in through air conditioning systems, moving pictures that extended beyond the peripheral vision, stereophonic sound delivered by dozens of speakers. Sensory stimulations would be provided in the proportions at which they naturally occurred (as listed above). Attention would be directed and maintained not through use of cinematic tricks, but by mimicking the natural focusing functions of the human eye. Through the creation of multi-sensory based theatric, man would better learn to manipulate the “sense materials,” to develop and arrange greater forms of art (1955/2002). With these procedures, based on the natural biology of man and applied to the methodology of art, Heilig believed that, “The cinema of the future will become the first art form to reveal the new scientific world to man in the full sensual vividness and dynamic vitality of his consciousness” (1955/2002).Unfortunately,Heilig’s ideas met with the same problem that he cites in his essay as delaying the development of 3D and films with sound: short-sighted financiers unwilling to provide funding. Before writing the essay, Heilig had already pitched his ideas in Hollywood, had them roundly rejected, and moved to Mexico City where he found them better received (Packer & Jordan, 2002, . In fact, “The Cinema of the Future” was originally published in Spanish, in the Mexican architectural journal Espacios.”[1]