As the artists Christa Sommerer and Laurent Mignonneau write, “Life Writer consist of an old-style typewriter that evokes the area of analogue text processing. In addition a normal piece of paper is used as projection screen and the position of the projection is always matched with the position of the type writer roll. When users type text into the keys of the type writer, the resulting letters appear as projected characters on the normal paper. When users then push the carriage return, the letters on screen transform into small black and white artificial life creatures that appear to float on the paper of the type writer itself. The creatures are based on genetic algorithms where text is used as the genetic code that determines the behaviour and movements of the creatures.” [1]

The philosophy behind Life Writer is that of emergent interaction by user interaction: “By connecting the act of typing to the act of creation of life, Life Writer deals with the idea of creating an open-ended artwork where user-creature and creature-creature interaction become essential to the creation of digital life and where an emergent systems of life-like art emerges on the boundaries between analog and digital worlds.” [1] 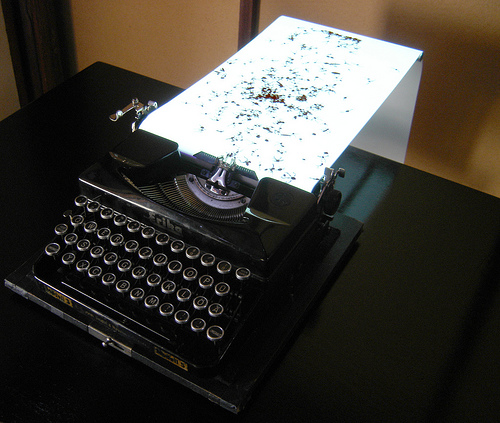 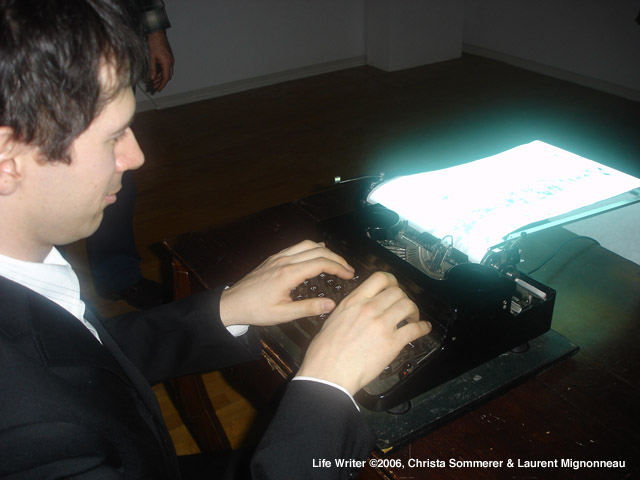 The interactive virtual life environment is also present in A-Volve (1994-5). Here participants are able to create creatures – in this case fish – more specifically by profiling their virtual fish. The fish evolve by surviving attacks of other fish and procreate passing along their code profile. The creatures in Life Writer reproduce similarly but survive by eating the letters the participant sends into the virtual world, not each other.

In the essay, “Artificial Life and Interactivity in the Online Project TechnoSphere“ (1996) Jane Prophet discusses her project TechnoSphere as an application of artificial life as a medium. Here participants are able to create a virtual creature to let it develop itself in the virtual landscape subsequently. “For example, a creature can splice digital DNA with another if they are similar, but only if both creatures are more than 50% full of food, otherwise cybersex is out of the question and the search for food takes priority.” [2].

TechnoSphere is also similar to the approach of Life Writer in the evolution of artificial life: “The notion of self-organising artificial life systems which we have used in TechnoSphere depend on a ‘bottom-up’ approach, with behaviour emerging as artificial creatures interact, rather than us imposing a ‘top down’ control on behaviour.” [2].

The only ‘top-down’ control in Life Writer is death. In the complete document by Jane Prophet, she also states that “Our intention is that users should not be able to interfere with creatures by, for example, killing them” [3]. This is an distinct difference with Life Writer where in Life Writer the participant does have control over both creation and death by striking the typewriter keys and using the scrolling functionality of the typewriter respectively.