In Mateusz Herczka’s work Life Support Systems – Vanda (2004), he seeks to expand the human’s ability to map complex systems with the aid of technology. Herczka comments on the nature of this specie’s existence. “They grow on tree branches with the roots exposed, and they collect water from the morning air. The body of the orchid is ugly, but the flower is 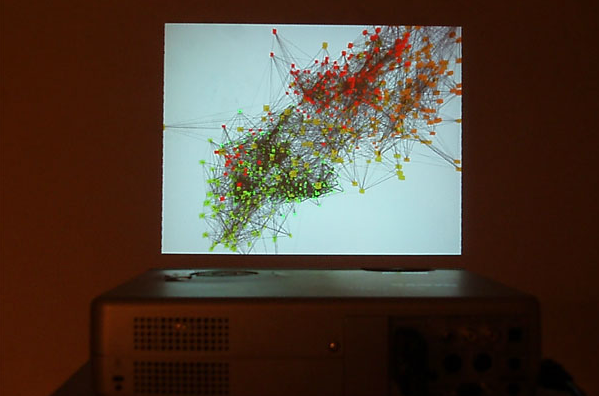 the best! Highly desirable.” In essence this species of orchid, like so many other living things that fall prey to humanity's intrigue, are extracted from their natural habitat and forced to preform as a mass-production device for whatever parts are desired. Herczka appropriates the open-growth cultivation process that is used to produce this orchid because it gives him direct access to a plants root system over a long period of time. He considers these bare-root Orchids as partially synthetic in nature due to the human-controlled environment they are reliant on. Herczka took this simulated and artificial existence and, and as he puts, “[attempted to] push an orchid all the way over the barrier so that it becomes completely artificial.”

How does this work? It all comes down to electricity. All known organic material has electric charge, and modern science is in the process of discovering how much information can be unpacked by simply measuring change in electric charge across an organic entity/object. This 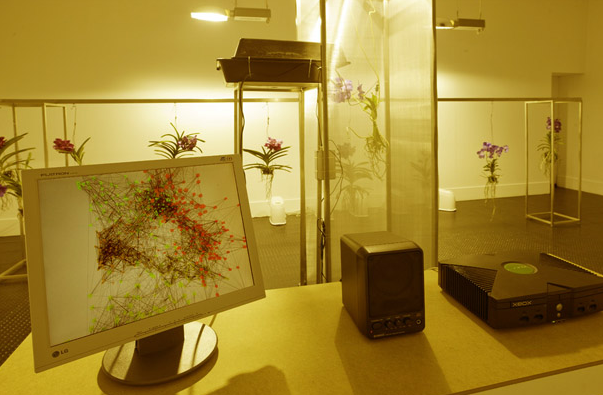 area of research is intriguing to all pillars of thought: from neuropsychology, cosmetic surgery, and advanced mathematical stochastic process research, to military applications of questionable integrity. His hardware is designed specifically to measure electrical charge along the plants roots. The readings(referred to as extra-cellular bio-potential) then flow through an amplifier before arriving in a hacked Xbox (the first generation of Xbox, that is) were the data is processed, interpreted, and translated into a computer-generated map of the plant’s potential growth patterns.

In effect, it could also be supposed that once these orchids die, their growth pattern, or “expression” as Herzcka puts it, can be extrapolated upon to continue the growth of the orchid. In doing so Herzcka and the orchid alike play a role in blurring the line between what life is. Other contributors come to mind. First would be Eduardo Kac's transgenic installation “genesis” which focuses on the encryption of DNA, and how it is only a set away (if at all) from being computer code. [1]Or, on the bio-mechanical side, another project that stands out is TCA's NoArk project, who extracts biological cells from a living thing  and then sustains them in a controlled environment with a predetermined shape and environment to live within. [2]

Present assumptions of what life is amd what life could be are coming more and more under the magnifying glass.  Could an orchid become digital? If so, could the information we have of its growth pattern, its “expression” as Herczka puts it, be the translation to an evolutionary state outside of the body? Is biochemistry really is a requisite for life and identity?

He also comments that his use of an Xbox is a critical part of the piece. He states that by using an Xbox instead of any other computer, he is putting a time stamp on his work so that it can be “planted in the year of 2005, which can be compared to a projected date of 2040 when we will be able to scan and capture a human mind. Supposedly at that time, an artificial brain will be able to interact inside the computer with an artificial orchid of 2005.”