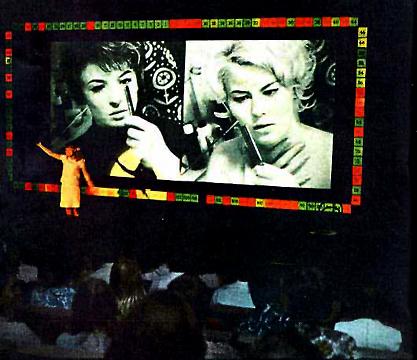 Billed as “the world’s first interactive movie,” Kino-Automat by Raduz Cincera was shown in a specially-built theater in the Czech Pavilion at Expo ’67 in Montreal. Each of the 127 seats in the theater had a pushbutton panel with one red and one green button. Five times during the movie, the show stops and a live performer appears on stage and asks the audience to vote on which of two possible scenes should play next. Everyone’s vote is visible around the perimeter of the film screen. As if by magic, the voted scene is played.

It’s not magic but clever design: rather than creating an exponential branching structure requiring many possible scenes, Cincera wrote the script such that each scene ends back at the same next option, regardless of which was chosen.In fact, the “magic” was really a projectionist switching the lens cap between two synchronized projectors based on the voting results.

It’s important to note that there is no “new media” technology used for Kino-Automat. Yet it’s one of the first known examples of “interactive media” of any kind and is therefore relevant. 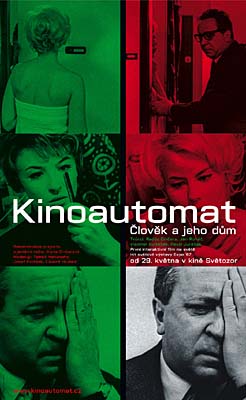 Cincera made Kino-Automat as a politically-inspired joke. The opening scene is of Mr. Novak, the main character, in front of a burn-down apartment building saying “it wasn’t my fault, really. Let me tell you my story.” Thus the initial set-up is that the story is a flashback with a pre-determined ending. After some of the choices, Mr. Novak appears onscreen again and say to the audience “That’s an excellent choice. I’m glad you made that choice, and I don’t say this often!” Cincera, a Czech during the Cold War, wanted to make a commentary on the illusion of control of voting.

Kino-Automat inspired me [Michael Naimark], largely because it demonstrates that in the end, the difference between actual control and apparent control, is zero.

Text by Michael Naimark, from http://stage.itp.nyu.edu/history/timeline/kinoautomat.html

See also Naimark’s notes about talking with the Cincera during a visit to Prague:  http://www.naimark.net/writing/trips/praguetrip.html

Entries in AEM Online Companion about Naimark and his work