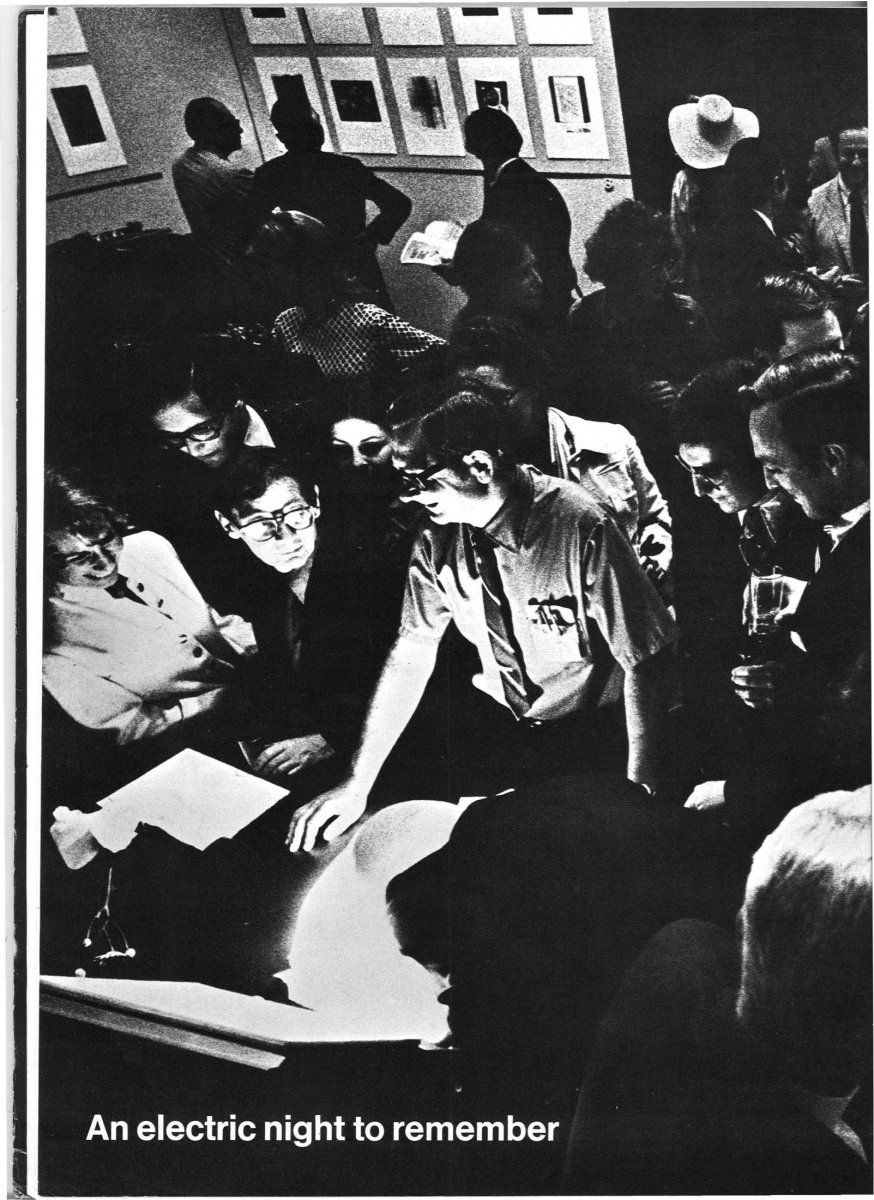 Installation view at opening of Software exhibition at the Jewish Museum in New York, 1970.  Image from exhibition catalog.

In 1969, art historian and media theorist Dr. Jack Burnham approached Professor Sheridan about participating in an exhibition he was organizing at the Jewish Museum in New York for the following year. The exhibition, titled “Software,” exposed the public to a wide variety of perspectives concerning the functional applications of information processing systems. (1)

The project represented a fresh take on the exploration of technology’s impact on creative production: members of the public would have the ability to respond to and interact with computer-built environments operated by participating artists. The catalog for the event, edited by Burnham with the assistance of others involved in the show, emphasized the importance of interactive artist/audience relations. (2) In the catalog’s introduction, for instance, he states, “(a)nother goal of ‘Software’ is to make clear that art itself is a form of intermittent dialogue. We are trying to make that sense of dialogue a conscious event.” (3) In an interview excerpt, Professor Sheridan recalls that the opportunity to interact with the audience was the main reason she decided to participate in the project. (a) In this other excerpt, she discusses the participatory dimensions of other artists’ work included in the exhibit and the excitement that it generated. (b) Building upon the theme of interactivity, the press release announcing “Software” emphasized the event’s participatory objectives. (c)

Professor Sheridan termed her contribution to the exhibit, “Interactive Paper Systems (1969-1970)” (d), and intended the work to highlight the image-making capabilities of communications technologies in real-time.

After demonstrating various graphics processes in relation to classroom instruction, Professor Sheridan offered attendees the ability to experiment with two instruments produced by the Minnesota Mining and Manufacturing Company (3M): the Thermo-Fax machine and the Color-in-Color copier. (4) She hoped that the experience of working with new graphic tools would lead to greater awareness about the creative possibilities afforded by rapid methods of production. In her words, “It is obvious that this work process becomes another kind of time for the artist as the distance from conception to conception is reduced to minutes and objects change as rapidly as thinking allows.” (5) In addition, commercial imaging tools required minimal training and were adaptable to the preferences of users.

Not surprisingly, Professor Sheridan approached the exhibition as if it were an extension of the Generative Systems classroom. Her style of presentation expanded upon a workshop format that she had developed: professional demonstrations, hands-on experimentation with different technologies and student/teacher consultation. Similar to a Generative Systems class, she was sensitive to the configuration and placement of equipment within the exhibit space, as the diagrams attached to this organizational document demonstrate. (e) Also, Professor Sheridan insisted on having graduate students from the School of the Art Institute of Chicago travel with her to New York in order to participate in presentation activities, granting them real-world production and exhibition experience. Finally, similar to the lesson plans she devised for individual class sessions, Professor Sheridan established a schedule for completing a host of instruction-related tasks. (f)

(1) “Software,” sponsored by the American Motors Corporation and the Smithsonian Institution in conjunction with the Jewish Museum, took place at the Museum’s Manhattan location from September 17-November 8, 1970. Originally, the exhibit was intended to move to the Smithsonian immediately following its NYC incarnation but damage caused by a fire prevented the move for taking place.

(2) Jack Burnham’s activities in relation to the exhibit are discussed by scholar Edward Shanken in his paper, “The House that Jack Built: Jack Burnham’s Concept of ‘Software’ as a Metaphor for Art,” Leonardo Electronic Almanac, Vol. 6, no. 10 (November 1998): http://leoalmanac.org/journal/vol_6/lea_v6_n10.txt

(3) Jack Burnham, introduction, Software Information Technology: Its New Meaning for Art (New York: Jewish Museum, 1970) p. 12. It should be noted that the catalog for the exhibit was never published but copies were distributed to participating artists and attendees.

(4) In addition to providing the machines for use during the exhibit, 3M also allowed Dr. Douglas Dybvig (the inventor of the Color-in Color machine) and Mr. Don Conlin (project manager) to attend the event and assist Professor Sheridan in introducing the company’s products to the public.