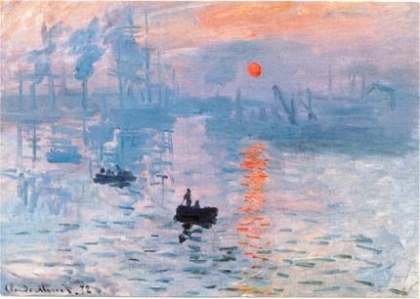 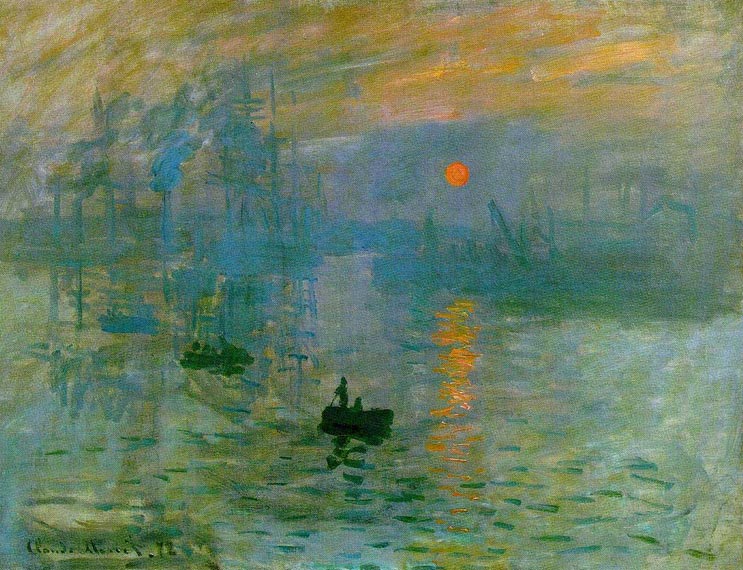 “Impression, Sunrise (Impression, soleil levant) is a painting by Claude Monet, for which the Impressionist movement was named. Dated 1872, but probably created in 1873, its subject is the harbour of Le Havre in France, using very loose brush strokes that suggest rather than delineate it. Monet explained the title later:

‘Landscape is nothing but an impression, and an instantaneous one, hence this label that was given us, by the way because of me. I had sent a thing done in Le Havre, from my window, sun in the mist and a few masts of boats sticking up in the foreground….They asked me for a title for the catalogue, it couldn’t really be taken for a view of Le Havre, and I said: ‘Put Impression.’

It was displayed in 1874 during the first independent art show of the Impressionists (who were not yet known by that name). Critic Louis Leroy, inspired by the painting’s name, titled his hostile review of the show in Le Charivari newspaper, “The Exhibition of the Impressionists”, thus inadvertently naming the new art movement. He wrote:

‘Impression — I was certain of it. I was just telling myself that, since I was impressed, there had to be some impression in it … and what freedom, what ease of workmanship! Wallpaper in its embryonic state is more finished than that seascape.’

The painting was stolen from the Musée Marmottan Monet in 1985 and recovered in 1990. Since 1991 it has been back on display in the museum.

Monet painted the sun as having almost exactly the same luminance as that of the sky, a condition which suggests high humidity and atmospheric attenuation of light. This detail relies on the use of complementary colours and variety of colour temperature, rather than changes in color intensity or contrast of values, to differentiate the sun from the surrounding sky.” [2]

Some of Monet’s paintings are n this video: