Documentation of “Essay Concerning Human Understanding” begins at about 2:05 minutes.

“Essay Concerning Human Understanding” was a live, bi-directional, interactive, telematic, interspecies sonic installation I created with Ikuo Nakamura between Lexington (Kentucky), and New York. In this work, a canary dialogues over a regular phone line with a plant (Philodendron) 600 miles away. Placed in the middle of the Center for Contemporary Art, the yellow canary was given a very large and comfortable cylindrical white cage, on top of which circuit-boards, a speaker, and a microphone were located. A clear Plexiglas disc separated the canary from this equipment, which was wired to the phone system. In New York, an electrode was placed on the plant’s leaf to sense its response to the singing of the bird. The microvoltage fluctuation of the plant was monitored through a Macintosh running a software called Interactive Brain-Wave Analyzer (IBVA). Ironically, a program designed to detect human mental activity was employed to inspect the vital activity of an organism generally understood as devoid of consciousness. The information coming from the plant was fed into another Macintosh running MAX, which controlled a MIDI sequencer. The electronic sounds themselves were pre-recorded, but the order and the duration were determined in real time by the plant’s response to the singing of the bird. 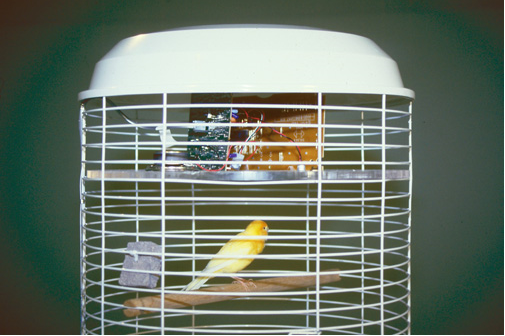 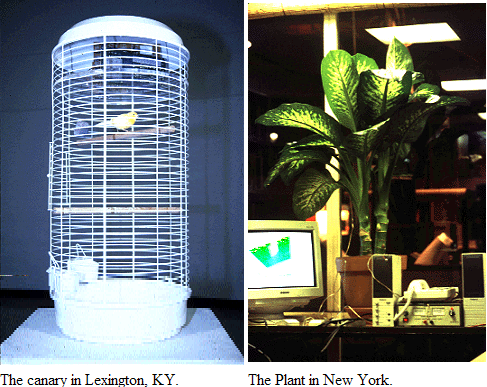 By enabling an isolated and caged animal to have a telematic conversation with a member of another species, this installation dramatized the role of communication and telecommunications in human lives. The inter-species communicative experience observed in the gallery reflects our own longing for interaction, our desire to reach out and stay in touch. This interactive installation is as much about creating art for non-humans as it is about human isolation and loneliness, and about the very possibility of communication. As this piece projects the complexities of electronically mediated human communication over non-human organisms, it surprisingly reveals aspects of our own communicative experience. This interaction is as dynamic and unpredictable as a human dialogue.