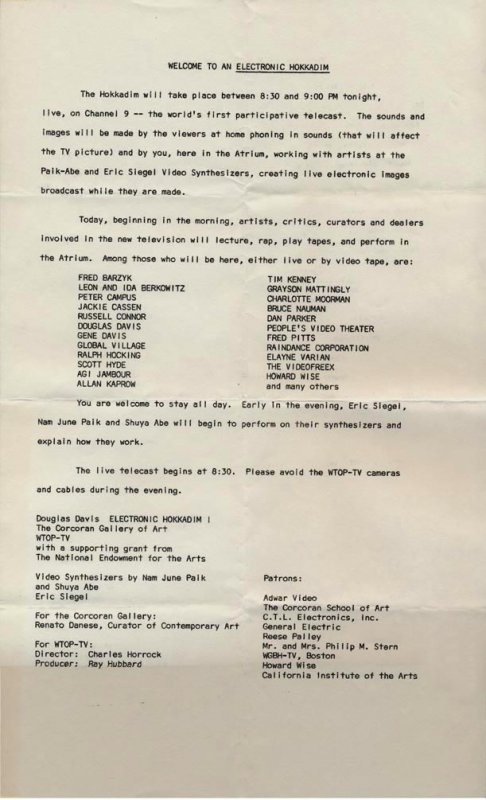 This page contains a reproduction of the official program of the Electronic Hokkadim.


“In 1971 and 1972 Douglas Davis integrated interactions with and between spectators in programs of the Commercial Broadcast. It was planned for “Electronic Hokkadim” (1971) to combine a life show sent from the Corcoran Gallery of Art (Washington D.C.) with reactions in the form of telephone calls. But the broadcast “WTOP-TV” (a filiation of CBS) transformed Davis´ project into a “personality parade” with “amazing participative [telephone] inputs” added in the last two minutes. The life filmed pictures were transformed by video-synthesizers (of Nam June Paik/Shuya Abe and Eric Siegel?). The electronic picture transformations reacted to the spectators´ sounds.” (Thomas Dreher)

“In June 1971, Davis organized his final climactic happening in Washington, Electronic Hokkadim, produced with the Corcoran Gallery and CBS affiliate WTOP-TV. Poster manifestos proclaimed, in appropriately streaming syntax, “the world’s first participative telecast live while it is happening the viewers create what they watch and hear at home.” The day-long event culminated in a half-hour evening broadcast involving many pioneering video artists, including Nam June Paik, Eric Siegel?, Bruce Nauman? and Peter Campus?, as well as the artist collectives Videofreex?, Raindance Corporation, Global Village and People’s Video Theater. Howard Wise, now a familiar colleague, delivered a keynote statement that “the artist’s role in society is that of a pre-sensor of things to come.” Although Electronic Hokkadim had mixed results, failing to live up to its claims as a “two-way broadcast,” it tapped into yet unexplored capacities for television.

Around this time, John Hightower?, newly appointed director of the Museum of Modern Art (he previously shaped the very progressive New York State Council on the Arts) became determined to hedge against MoMA’s reputation for stodginess. A forward showing of artists’ television could rattle the moribund institution. Hightower spoke to Davis about reconvening the spirit rallied at Electronic Hokkadim – of artists, filmmakers, critics, curators, administrators and others attuned to the video medium (which still eluded aesthetic categorization and art-world acceptance). First intended to be spearheaded by an exhibition that met resistance from MoMA’s “stodgy” curators, it quickly became obvious that the pressing need was for a wide-open forum on artists and television.” (Ben Portis)