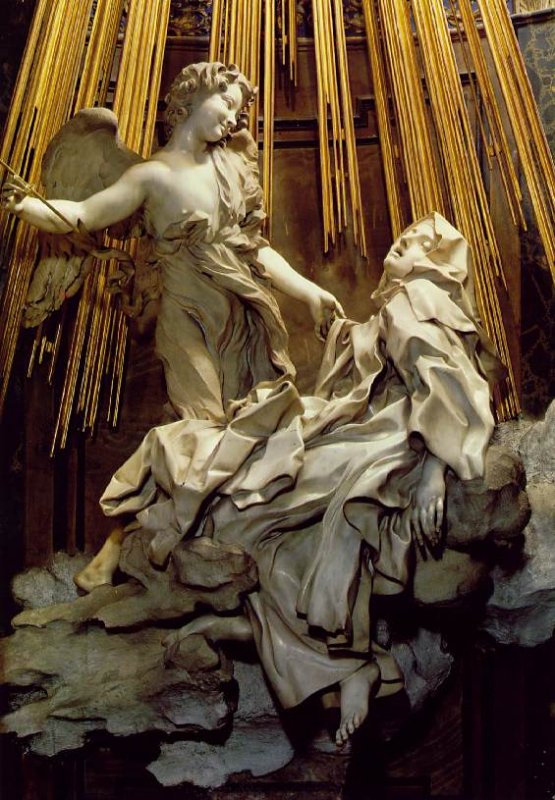 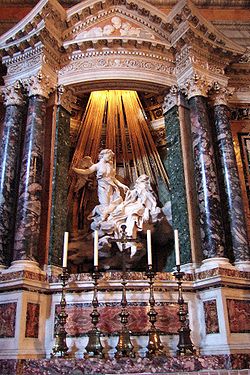 “The Ecstasy of Saint Theresa (alternatively Saint Teresa in Ecstasy or Transverberation of Saint Teresa) is the central marble group of a sculpture complex designed and completed by Giovanni Lorenzo Bernini for the Cornaro Chapel of Santa Maria della Vittoria in Rome. It is one of the sculptural masterpieces of High Roman Baroque.

The entire ensemble was overseen and completed by a mature Bernini during the Pamphili papacy of Innocent X. During this time, the sculptor’s past involvement with the profligate expenses of the prior Barberini papacy had disgraced Bernini and deprived him of much Vatican patronage. The services of Bernini’s studio were thus available to a patron such as the Venetian Cardinal Federico Cornaro (1579–1673). Cornaro had chosen the otherwise nondescript church of the Discalced Carmelites for his burial chapel. He had reason to avoid burial in Venice, since his appointment as a cardinal by Urban VIII while his father Giovanni was Doge had created a furor in his home-city, which banned families from holding such powerful positions simultaneously. The chapel chosen had previously depicted St. Paul in Ecstasy, and the Cardinal replaced it with the ecstatic event undergone by the first Carmelite saint, recently canonized in 1622.”[1]

“The two focal sculptural figures derive from an episode described by Teresa of Avilain her autobiography, The Life of Teresa of Jesus (1515–1582), a mystical cloistered Discalced Carmelite reformer and nun. The chapter describes divine visions, including one where she saw a young, beautiful, and lambent angel standing aside her body:

I saw in his hand a long spear of gold, and at the iron’s point there seemed to be a little fire. He appeared to me to be thrusting it at times into my heart, and to pierce my very entrails; when he drew it out, he seemed to draw them out also, and to leave me all on fire with a great love of God. The pain was so great, that it made me moan; and yet so surpassing was the sweetness of this excessive pain, that I could not wish to be rid of it. The soul is satisfied now with nothing less than God. The pain is not bodily, but spiritual; though the body has its share in it. It is a caressing of love so sweet which now takes place between the soul and God, that I pray God of His goodness to make him experience it who may think that I am lying.”[2]