“The trouble with digital electronics is that you can’t make it act pathological.”

[Un-attributable personal communication from Tim Perkis, c. 1984, founding member of the The League of Automatic Music Composers — Tim claims he never said this…I claim I heard him say it].

The quote above reflects the difficulty that analog electronic musicians had in “perverting [the] technological correctness” (Rafael Lozano-Hemmer) of early computer equipment. It either worked, doing whatever its builders intended it to do, or it crashed into a steaming pile; very seldom could it be coerced into doing some-other-interesting-thing. Artists working with analog electronics were allowed a wider range of ‘mistakes’ due to the relative robustness of the signals involved.

For example Woody and Steina Vasulka’s interest in the video waveform itself allowed vast areas of manipulation, granted that first one had to be in sync with the signal, as demonstrated in the program of Steina’s video works presented at Currents 2015. Gordon Mumma’s Hornpipe is perhaps a clearer example. It is a linked feedback system of space, performer, and instrument, where one component of the instrument is a “cybersonic” box of self-tuning analog filters. The filters could make ‘mistakes’ which the performer could enhance by playing the room’s acoustics.

Now, finally, it seems that the digital is achieving the plasticity of clay, paint on canvas, or even analog electronics. Several Currents 2015 participants have developed, or cobbled together, computer based tools which provide the robustness needed to just dig in and explore and experiment with the material at hand. It’s much like the shift from the brush of a Mannerist painter to the sponge of a Max Ernst frottage.

For Red Forest, Robert Campbell described “Mining the After Effects [a post-Freudian reference to one of the pieces of software he uses] of intentional actions,” as a working process and, on a larger scale, as the intent of his work.

The piece is a six-screen display of slowly morphing overlapped imagery which pass from screen to screen quietly illuminating man’s effect on the environment, especially with reference to the Chernobyl disaster. 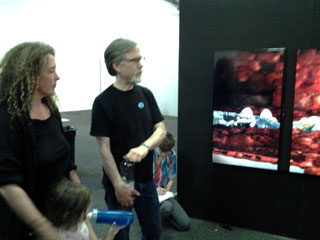 Campbell starts with real-world images and experiments with them until his artistic instincts find a trail to follow through the maze of functions. Earlier iterations of this trail-blazing would have been unlikely to see the forest for the trees of highly technical problems to be solved. He uses the results of his explorations to elucidate the (un)intended consequences of human processes in the world around us.

For Emblems of Ascension, the NoiseFold team of Cory Metcalf and David Stout have developed a gigantic library of software modules for synthesizing and modeling both sound and image under the rubric of the Max/MSP programming environment. Their ten-year collaboration has given them tools and interfaces which allow the exploration of myriad links made in and between the components. Once a system of modules has been established it can be mined for interesting and evocative connections that are turned into multiple ‘finished’ works. I put finished in quotes because, by the very nature of being produced in the system’s real time operation, the work is always being created anew. 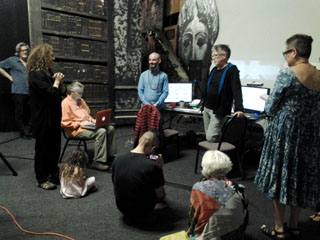 NoiseFold: Cory (in light blue top and David (to his right, in black top) discuss Emblems of Ascension with the Currents seminar, “Thinking and Writing about New Media.”

In this multi-screen image and sound installation NoiseFold has assembled a set of modules which produce digital simulations of spinning particle fields that explore the interplay between inertia, noise and force of attraction. The sound is generated in response to the images through a complex system of relationships, creating one integrated whole.

With this progress in tools we can start to imagine an actual collaboration between humans and machines where, rather than participating in a one-way struggle, each contribute what they do best in a two-way dialog. And once these collaborative systems are established, their collective behavior will become more interesting than any particular ‘finished work’.