Dialtones, produced in 2001 by artist Golan Levin, is a musical ensemble of participant’s cellphones that is much like an auditorium-style concert. This work of art has played in many places, including its debut at the Ars Electronica Festival (Linz, Austria) in 2001 [1]. The performance is put on by a group of people, such as composers, technicians, and interactions, but it is played by the partcipants themselves! Levin had a pretty specific purpose in mind when he made this, which was in essence to bring the human-technology interaction into a performance. By allowing the users to methodically become a part of the show, allows the user to become one with the technology surrounding them. This work was meant to give a certain feeling towards the audience, and to let the audience feel the effect of the technology in their pocket, in a visual and audio performance.

The whole performance works by participants sitting in the right places with the right dialtones. 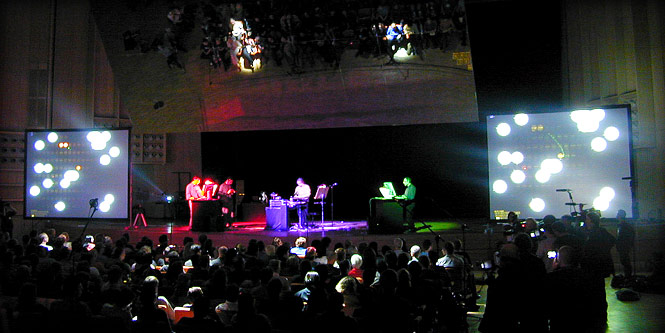 When participants enter the show, they are assigned seats and assigned ringtones. On stage there are four people who control the entire performance, including the sound, and what comes up on the screen. The sounds heard are a diverse variety of common dialtones heard on cellphones from the last decade. It is very melodic, and combines sounds in beats. Two screens make up the focal point of the stage, while there is little ambient light. Some seats in the crowd light up when those sitting there play their dialtone. The lit seats are represented by positions on the screens, so viewers can see where the noise is coming from, as well as hear the sounds surrounding them.

In terms of its presentation, it reminds me a lot of Datamatics (2006) by Ryoji Ikeda [2]. Datamatics takes computer sounds and makes a melody out of it, while there is matching visuals on a screen.  Both have melodic beats matched with visuals, but the contrast here is that Dialtones is more about the participation of everyone, whereas Datamatics could go on with no viewers. This connection between the viewers of the performance is very important, and intentional, to give the desired effect.

This show is gripping both with its sound and visuals, but I think connection to the audience is what gives the intended feel of the work. As the viewers are intrigued by the familiar sounds of the cellphone world, there is a certain visual pattern that goes along with the noise. Golan Levin says on the work, “It is hoped that the experience of Dialtones can permanently alter the way in which its participants think about the cellular space we inhabit.” [3] It is intriguing to look at the audience’s seats be lit up, and then seeing the matching pattern on the screen onstage. The locus of interaction is kind of virtual in this case, as it lies invisibly between the people. Of course they can see it, but more importantly they are making it, so I think that is what gives it a virtual locus of connectivity. It gives the viewer a way to participate and add to the whole performance, which makes it dynamic. Lev Manovich, a very well know person in digital art, would see the sophistication in this design. Lev Manovich is quoted saying, “Smart design, of course, is not just about using good lighting and quality materials, and thinking about how to create comfortable spaces, which have ambience and atmosphere using variety of means … “Ultimately, smart design is about fresh thinking: not taking anything for granted, and re-thinking every convention and every detail of space, an object, or a process.” [4] Golan Levin certainly did that, and I would imagine accomplished his goal of trying to permanently alter the perception of the cellular space we inhabit.

Only one of Golan Levin’s many works, Dialtones is still very important for its implications in society at that time. The year 2001 was around the time of the cellphone boom, right as society was all starting to use them. This really showed the connectivity between all of us now, which is new a concept for our society. I’m sure Levin knew that the cell phone was going to boom, so that is probably why his goal was to alter people’s perceptions. He does this, by showing participants and viewers the interactivity and connectivity of cellphones, which we are constantly reminded of with performances like this. Of course we all know of the power of cell phones now, more than 10 years after this concert. This medium of charged environments from crowd participation is really something interesting, and this is just the start of more to come as technology advances, hopefully. Golan Levin had a goal with this piece that I think he achieved, being so interactive the crowd can really feel the effect, which was awareness of cellular connectivity in today’s day and age.