Box by The Creators Project

Bringing projection mapping to moving objections, Bot & Dolly endeavored to create an exhibit in coded form that had never been attempted before. Their creation, “Box,” sufficiently accomplished this mission through a visual and musical experience entailing two automated robots each orienting a blank 4’ x 8’ canvas in coordination with projectors and a live human actor. 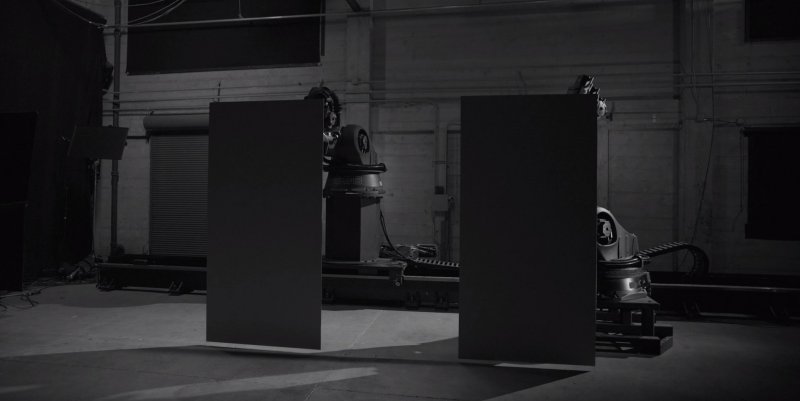 To offer a little background, projection mapping is the process of projecting images onto unconventional surfaces, transforming them into complex shapes, environments, and images. This process allows artists to employ various optical illusions to turn regular walls into living moving objects. Here is an example of traditional projection mapping. “Box” took projection mapping several steps further by simplifying their canvas, but allowing it to move in a coordinated manner.

Ever since the advent of Coded Form and Electronic Production in 1801, “a range of algorithmic techniques [have been used] to generate form from mathematical formulae” (Shanken, 22). “Box” is the culmination of many of these latest technologies available to an artist today. Utilizing pre-determined formulas to govern the rotation and position of a robot’s joints, obstacles are alleviated, allowing the effortless and seamless illusion of an actor manipulating 3-D objects to engross the viewer. Reas described this relationship between elements as “structure.” Simply put, “some structure are unique to software and are not possible to express in other media” (Reas). Without the ability of software to interpret an artist’s will into actionable sequences, the manual manipulation of the canvases would have made this project impossible.

While “Box” would be ideally exhibited live, in order to share the work created to a wider audience, the artists elected to capture the presentation as if one were in the room. Utilizing the breakthroughs of camera technologies, a camera scout mimics the motions of a curious on-looker highlighting “Box” from a viewer’s perspective. These underlying engineering marvels, in conjunction with computer rendered optical illusions, allows for the transformation of factory line robots into a robust electronic production through its coded form. 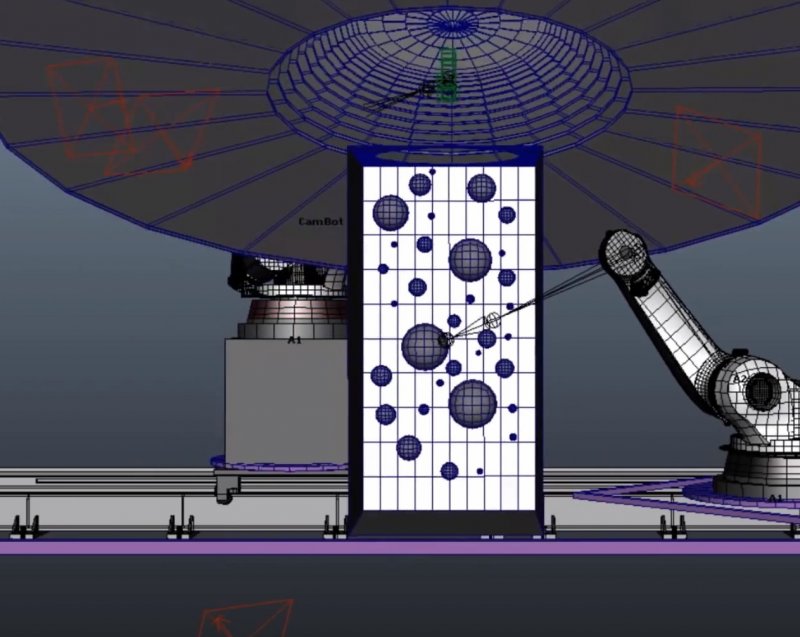 The pinnacle of software is its ability to “’process [and] manipulate…abstract things [like] data’” (Reas).  Automating the process of creating the visual effects allows the creators to focus on the storytelling. When the technology evolves to the extent as advanced as it is today, the result is indiscernible from magic. When movie goers first experienced motion picture in a cinematic setting, audiences ran from their seats at the sight of a train rushing off the screen. Today, people have grown accustomed to seeing anything happen on screen often believing virtual sets to be real. Much like regular projection mapping, “Box” bridges the physical world with computer generated visuals. The marriage of the two, when experienced in person, is nothing short of magical.

The themes in the video include: transformation, levitation, intersection, teleportation, and escape to salvation. These principles of magic encompass what a great magic show should entail. “Box” performs these tricks while breaking the laws of physical earth. Yet, the presence of the physical reality are always present with the whirring of gears, belts, and motors in the background accompanied by music which enhances the very real interaction between man and machine. The illusions presented, much like the origins of projection mapping, encompass the thematic design of optical illusion.

To compare with another work in AEM-OC, Virtual Mirror – Rain, “challenges one’s perceptions about fundamental phenomena” (AEM-OC). By instlling rain not only indoors, but in reverse direction of gravity drop for drop, “Rain” puts viewers in an alternate reality where the physics of Earth do not apply. Much like the illusions of “Box” the seemingly impossible feats of teleportation and levitation are effortlessly accomplished with the gesture of a hand as a magician would have motioned on stage.

I should add a disclaimer that Bot & Dolly sell cinematographic technology and this commissioned art piece was a ploy to sell the capabilities of their equipment. However, the money making motives do not deter from the fact that they have revolutionized and reimagined storytelling technology. With the advent of CGI, artists garnered the ability to create unreal worlds and give humans godly gifts, yet the major downfall with CGI is that everything must be preplanned. A major creative process of trying, failing, and haphazardly stumbling on brilliance is lost. Bringing back the physical-ness reintroduces the possibility of turning mistakes into a breakthrough idea.

The concerted performance of human and machine illustrates how far machines have progressed into becoming one of us. Not only do they serve as tools to make our lives better, “Box” shows how robots can be utilized to be our companion in expressing emotion and fostering connections, arguably the basis of human existence.