“Audiopad is a composition and performance instrument for electronic music which tracks the positions of objects on a tabletop surface and converts their motion into music. One can pull sounds from a giant set of samples, juxtapose archived recordings against warm synthetic melodies, cut between drum loops to create new beats, and apply digital processing all at the same time on the same table. Audiopad not only allows for spontaneous reinterpretation of musical compositions, but also creates a visual and tactile dialogue between itself, the performer, and the audience.” [1]. 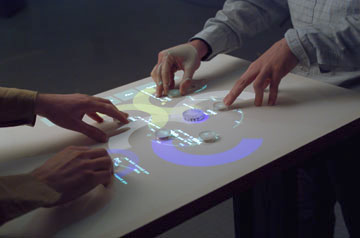 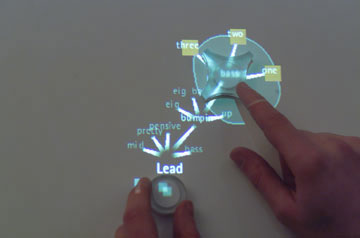 “Audiopad has a matrix of antenna elements which track the positions of electronically tagged objects on a tabletop surface. Software translates the position information into music and graphical feedback on the tabletop. Each object represents either a musical track or a microphone.” [1].

The project is done by graduate students of MIT at the MIT Media Lab, Tangible Media Group. PingPongPlus – by the same Tangible Media Group – is also an example of charging interaction in an environment with visual feedback in otherwise empty space.

This work is very similar to the Reactable developed within the Music Technology Group at the Universitat Pompeu
Fabra in Barcelona, Spain by Sergi Jordà, Marcos Alonso, Martin Kaltenbrunner and Günter Geiger.

The work is also similar to Piano as an Image Media (1995) in AEM. In this artwork the computer and a musical instrument are combined by mediating the striking on the piano keys. Similarly to Audiopad is the computer mediated interface that replaces the physical interaction with this instrument. Both use touch and movement gestures and visual feedback to create sound and music. In Piano as an Image Media the sound originates from one physically present instrument where Audiopad seems to be able to present an unlimited library of computer generated sounds.

Lucio Fontana makes a striking notion on the limitation of one instrument alone. Movement and color – both implemented by AudioPad – create extra dimensions in The White Manifesto (1946): “Matter, colour and sound in movement are the phenomena whose simultaneous development completes new art. Colour in volume develops in space adopting successive forms. Sound produced by means that are still unknown. Musical instruments do not satisfy the need for vast ranges of sound and do not produce sensations of the required breadth.” [2].