Justin Lui trained as an architect before earning an MFA degree from the UCLA Design Media Arts in Los Angeles. He is also part of Defectikons, a team of media artists with whom he has co-created media installations and music projects. Lui is developing programmed and intreactive spaces that act at the scale of the participant’s body, such as Animate Field. His work is especially concerned with the sense of touch and the issue of art’s direct contact with the body.

Lui’s Animate Field is an installation constructed from a cloud of low-hanging fiber-optic filaments which create a volumetric mass through which participants are encouraged to move. It is a type of mediated architectural “skin” which takes on volumetric dimensions and interacts with the human body. Once a participant enters the installation, it sends waves of movement through the cloud. The red endpoints of the fibre-optic filaments are lit by the person’s movements. The participant’s movement is then mapped in the filament cloud, as the endpoints fade to a trail of yellow light, leaving a ghostly memory of their presence and their journey through the installation.
The fibres would tend to collect into large clusters after a few days of people passing through the cloud. Initially, the artist insisted on separating them, but soon realised that the installation wasn’t a defined discrete form (as designers are accustomed to creating), but instead was a set of conditions for a formal structure to emerge over time. It was a ‘socially generative’ formal mechanism as opposed to an explicitly designed form.

Lui’s work echoes what the GRAV Manifesto of 1967 so strongly proclaimed, “This Group is not concerned to create a work having light as its subject, nor to produce a super stage-performance, but (…) by a direct appeal to active participation, by playing a game, or by creating an unexpected situation, to exert a direct influence on the public’s behaviour and to replace the work of art or the theatrical performance with a situation in evolution inviting the spectator’s participation.” [1] The body’s movements and senses are at the core of Animate Field, it makes one aware of the countless motions we make throughout our life trajectories. 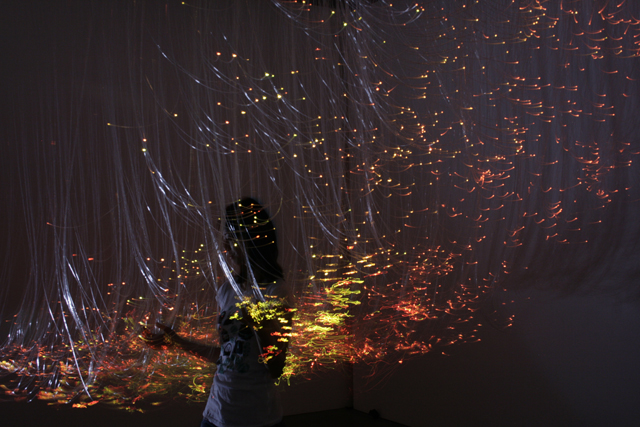 With regards to Animate Field, Lui remarks that his audiences had various reactions to his installation. Older people were apprehensive of interacting with the cloud of filaments, whereas younger people (< 30 years old) were much more courageous in their explorations. The artists explains this through the participant’s sense curiosity vs. personal inhibition. What happened often was that one brave soul would enter the fibre cloud, play with the fibres, then others would follow suit. Sometimes it became a shared experience between strangers. Interestingly, Lui did not anticipate this sort of sociability in Animate Field, but found it gratifying nevertheless.

As Animate Field requires active participation, it also informs participants of what is happening as they pass through the filament cloud. As their movement is mapped through the installation, they comprehend the experience as a construction which, in turn, allows them to question the impact that the artwork has on them. This recalls Olafur Eliasson’s (an admitted source of inspiration for Lui) The Weather Project from 2003-4.