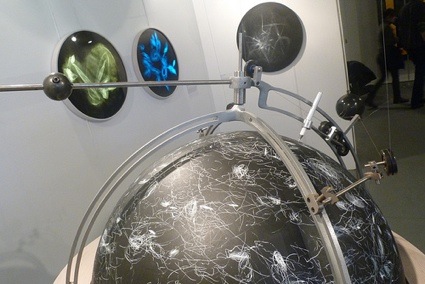 Balint Bolygo’s Mappings is a 2005 kinetic sculpture which utilizes the core aspects of the Bolygo’s ethos as an artist. In the sculpture/installation two pens rigged to outlying pendulums transcribe the motions taken by the pendulums onto a rotating sphere, or blank globe. Viewers can interact with the pendulums, pushing them to behave more erratically, or calming them to induce smoother lines. The resulting process essentially becomes the earth mapping its own forces onto a replica of itself, a truly interesting portrayal of mapmaking that encourages the viewer to consider the mass our planet, whose gravitational pull directs the motion of the pendulum and creates the drawings.