“More recently, light has been used as an artistic medium to illuminate a metaphorical passage between the earth and the heavens.” [1]

Tribute in Light is not only beautiful aesthetically, but also beautiful in content as it paid a tribute to the victims of 9/11. The NY Daily News describes the work: “The Tribute in Light is an art installation near the site of the World Trade Center in remembrance of the September 11 attacks. The lights were turned on at 7:11 p.m. and will shine until sunrise at 6:34 a.m. Wednesday, according to officials. The Tribute in Light, which is composed of 88 searchlights installed just west of the former Ground Zero, first blazed on the six-month anniversary of the worst terror attack on American soil.” [2]

The work was truly a collaboration of minds, consisting of “architects John Bennett and Gustavo Bonevardi of PROUN Space Studio, artists Julian LaVerdiere and Paul Myoda, architect Richard Nash Gould, and lighting designer Paul Marantz.” [3] The project was funded by Municipal Art Society and Creative Time. Tribute in Light exhibits a vivid and crisp light in the approximate area were the towers once stood and emits a message of strength and hope over the horrible attack. 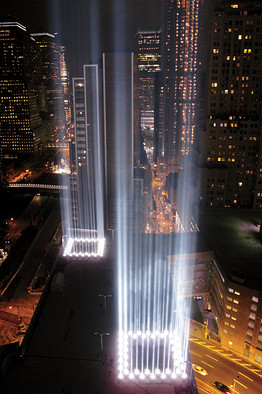 Light has always been a symbol of hope or of God’s presence in art, specifically since the enlightenment period as well as the early paintings of the annunciation of Christ. Julian LaVerdiere and Paul Myoda use the medium of light well in this piece as it boldly proclaims hope and, to an extent, a sense of peace that America will overcome the devastating attacks and will not forget the victims. Furthermore, Creative Time describes the work as the following: “Tribute in Light is a profound symbol of strength, hope and resilience, a reclamation of New York City skyline and identity, a tribute to rescue workers and a mnemonic for all those who lost their lives.” [3]

One reply on “Tribute in Light”