Combining the delicate, intricate folds of nature with the hard, clinical use of computer algorithms, artist Macoto Murayama digitally sculpts flowers that he painstakingly dismantles in order to further understand their structures. Working mostly in Japan, Murayama is a botanist, as well as an artist, who attended Miyagi University in 2007, and went on to study at the Institute of Advanced Media Arts and Sciences in 2009 [1]. 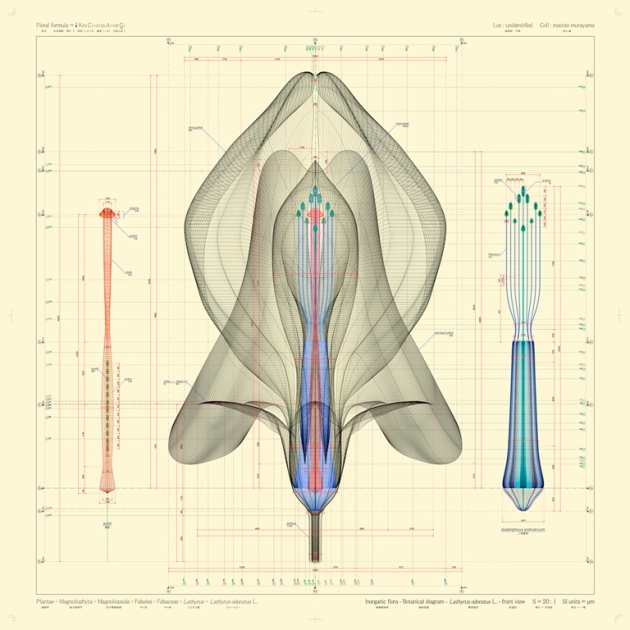 Each of his pieces is detailed to the most extreme degree. Each segment is annotated with the term, size, and shape of each piece of the flower [2]. The thin, blueprint-style lines that make up the image mimic the details and minutia of the plants he examines. He is able to make the rigid and technical lines capture the grace of the natural. He states that “when I looked closer into a plant that I thought was organic, I found in its form and inner structure hidden mechanical and inorganic elements” [3].

Murayama’s work is reminiscent of Edmond Couchot’s “I Sow to the Four Winds” in its goal to capture nature with pixels. While Couchot’s work is interactive, it is much more minimalistic, as it focuses on a flower’s regenerative powers, and not its internal structure [4]. The viewer is able to scatter the seeds of the dandelion with a puff of breath. The seeds then fall off the screen, and new flowers bloom in their place.  Robert Mallary wrote in his article, ‘Computer Sculpture’, that “for the first time the sculptor has access to a tool [the computer] which can be used not only for executing a work of art, but conceiving one as well” [7]. These pieces resemble sculptures condensed in two dimensional space, remaining intangible but extremely detailed, and in its own way, Murayama’s observations about botany make plants seem like their own simplistic computers. Murayama’s choice to expand the plants into blueprints forces the audience to think of these organic things in a digital way. He forces them to acknowledge the complexity of what they look at every day.

Both Murayama and Couchot’s work exist in a sort of three dimensional space, in a way that one can experience what is normally delicate and natural in a way that is impersonal and digital. The delicate equations, the inner workings of the computers, and the thin lines of these artworks correlate with the complex processes and structures as their biological counterparts.

Like the sculptures that Mallary describes, Murayama’s work is a piece of art that requires an attention to detail that is not normally required for art and an amount of skill that both stem from the medium of computer generated art.

[6] Sharon Ferris, picture of I Sow to the Four Winds