“Epigenesis: The Growth of Form” by artist Roman Verostko is an installation at the Frey Science and Engineering Center in St. Paul, Minnesota. [1] The work was installed in 1997, after a year of work, in the newly opened building. The installation, often referred to as a mural, is made up of eleven individual sheets of paper upon which a pen plotter applied acrylic ink. The designs are presented as a “visual symphony of form” [2] and are created through mathematical algorithms in Roman’s software. The large, dark stoke symbol that appears on some of the pieces is in fact the basic element used to create all of the pieces. [3]

Like many of Roman Verostko’s pieces, such as “Derivation of the Laws” (1990), [4] Epigenesis is difficult to classify as an artwork, and raises questions about the definition of art and whether art created through computer code can still fit into an existing definition of art. Like Epigenesis, Derivation of the Laws also employs algorithmic series to produce acrylic paintings using a plotter. Because of the production techniques, based in mathematical calculations and realized through a plotter, Roman's work begs the question as to whether the artist is in fact creating an intentional work of art at all, or whether it is fundamentally machine-made.

A similar question of artistic authenticity is being raised by many of the different types of new and especially digital media being used today. Michael Rees, for instance, discusses the use of CAD and Rapid Prototyping as an art-form. [5] Like Roman’s work, RP is computer-based and the final output artwork is produced by a machine. In RP’s defense, Rees states, “I think RP will help the artist be more precise, the engineer more creative, the scientist more knowledgeable. I would hope that industry will also recognize the contribution that artists have to make and will welcome them in their research and development efforts. The arts will, in turn, incorporate more of industry into their domain.” [6] This sentiment seems applicable to Roman Verostko’s algorithmic plotting art as well, for in both cases the artistic concept behind the artwork is inherently linked to the production methods and would have otherwise resulted in a fundamentally different kind of artwork. 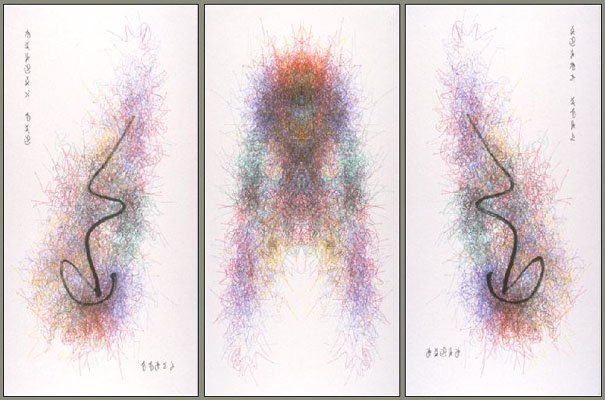 Related to this idea of production method and it’s link to artistic authenticity, the title, Epigenesis: The Growth of Form, provides an interesting insight to the work and how Roman Verostko intends for the piece to be viewed. Epigenesis refers to the idea that an entity is created from a single element but through a series of processes grows and differentiates itself into something obviously separate from its original form or really any one step of the process but is a cumulative work as a result of essentially unconstrained development. [7] With this in mind the production method of Epigenesis comes to the forefront in understanding the work. The use of a plotter creates a very distinctive artistic signature with it’s overlapping but exact brush strokes. The repetition but transformation of a single symbol into some larger artwork, where the individual strokes “grow” together in interesting, and sometimes unexpected, directions to make a final product is certainly deserving of the term Epigenesis. Considering this, it seems the final product is far from pre-determined by the artist and is instead allowed to grow based on the fundamental constraints put in place by the artist. In the end this does little to clear up the question of authenticity, for Roman isn’t actively directing the production of the art to a predetermined end, but rather watching it unfold from his initial concept. However, because Roman ultimately was the one who put the piece and it’s progression in action it seems that it should be considered an authentic piece of artwork in at least concept and originality of production process.

With both RP and Roman’s plotter art, the machine is simply a new media with which to do art. The creativity needed to imagine such a work, especially using new and generally untested media, is an artistic feat in itself. In both cases it is clear that while these digital media are new avenues down which art has only begun to progress, they must be considered art none-the-less, though perhaps not by a traditional definition. "Algorithmic art is different: an algorithm is an explicit, discursively articulated schema. It does not create the concrete materiality of its output – it merely specifies some of its properties, at a more abstract level. In that sense, algorithmic art is conceptual art." [8] In this sense the production method becomes almost more important as an artistic statement than the aesthetics of the final piece itself and forces a re-evaluation as to what can be considered art with today's expanding techniques and materials.

[7] Roman Verostko, Epigenesis: The Growth of Form. 1999. http://www.verostko.com/st/mural.html
and
http://www.merriam-webster.com/dictionary/epigenesis

2 thoughts on “Epigenesis: The Growth of Form”