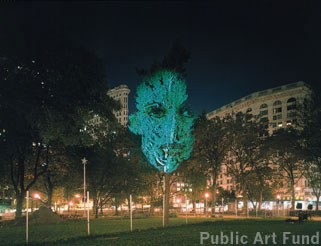 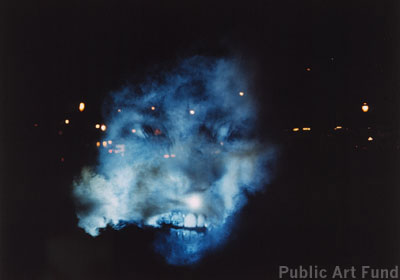 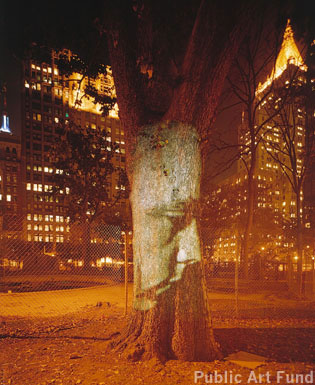 Target Art in the Park

Tony Oursler’s The Influence Machine, installed at Madison Square Park, captured voices and images of ghosts, both contemporary and historical, creating a séance experience that recalled 19th-century sound and light projections. Oursler experimented with video, smoke machines, a variety of soundtracks, and several sculptural elements to explore the historical and current impact technologies have on our daily lives.

The Influence Machine was comprised of projections of large faces onto smoke and trees with corresponding narratives–poetic texts written by Oursler for this project and other voices from the history of early technology. Images of knocking hands were also projected onto trees and surrounding buildings with corresponding knocking sounds that alluded to Morse code and other early forms of communication. Texts ran over construction fencing and trees pronouncing intimate and encoded messages. In addition to Oursler’s abstract narratives, the soundtrack for The Influence Machine included segments of radio feedback, the unusual sounds of a glass harmonica performed by Dean Shostak, and a score by Tony Conrad commissioned for this project.


tr@nsfer is a reference on Tony Oursler’s work. Forests and trees, as a space of ghosts’ appearance, are becoming a space of virtual characters’ appearance that live on the internet. The female figure relives moments of her online function and interaction with internet users, transferring emotions such as “waiting”, “inquiry”, “duration”.

Another installation of Tony Oursler at Soledad Lorenzo Gallery. Madrid.Spain