‘Murmur Study is an installation that examines the rise of micro-messaging technologies such as Twitter and Facebook’s status update. One might describe these messages as a kind of digital small talk. But unlike water cooler conversations, these fleeting thoughts are accumulated, archived and digitally-indexed by corporations. While the future of these archives remains to be seen, the sheer volume of publicly accessible personal — often emotional — expression should give us pause.'[1]

The project focuses on one of the key characteristics of the web; persistence. With sharing publicly your personal thoughts, relationships and chitchat, people make themselves easy targets for the commercial corporations. But why are people sharing so much of themselves on the web? Roy Ascott wrote in 1984 a possible explanation:

Logging in to the network, sharing the exchange of ideas, propositions, visions and sheer gossip is exhilarating, in fact it becomes totally compelling and addictive (Ascott, 1984, p. 231)


Murmur study looks like the sophisticated version of the installation News (1969) from Hans Haacke. ‘It [News] consisted of Teletype machines that received and printed out local, national and international news in real time, as it was generated by news services.'[2] 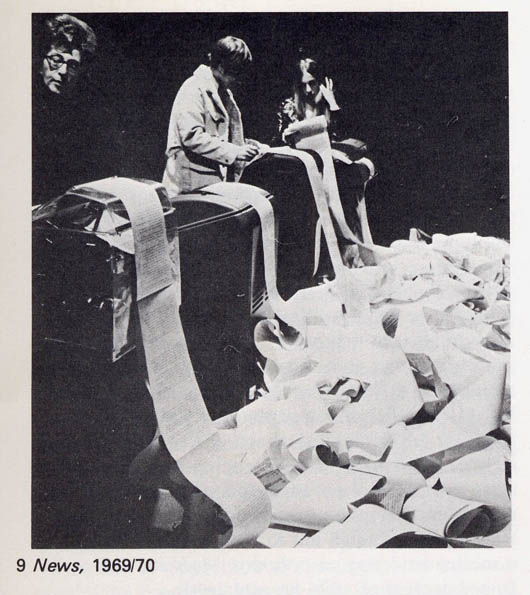 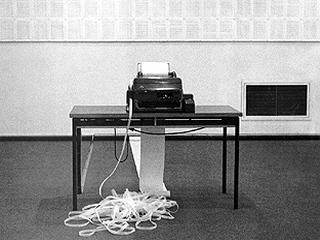 Where Haacke monitored the news with his installation, forty years later Baker is monitoring individual people. In the sixties the most important media were the mass media: the traditional newspapers, television and radio. In the beginning of the seventies artists began experimenting with networking, they started to create telematic art. The Internet started to spread in the eighties, coming in the hands of individuals. Now we are part of a distributed network, it is just as easy to speak with a friends who lives one street away as with a colleague who lives on another continent. It is appropriate that an installation made in the 2000s focuses on the individual. People just receive as easily as send, just as Brecht imaged when he wrote in the 1930s about two-way communication [3]. We have arrived in the third age of the logic of images distinguished by Virillio; the age of paradoxical logic.

This new kind of images gives priority to speed over race, to the virtual over the real, and therefore transforms our notion of reality from something given to a construct.[4]

Sounds familiar? Let’s hope that in some way the internet will be ‘cleaned’ and remove certain messages. Do we really want that our children in twenty years time see our Tweets about having diarrhea or hot sex? But of course, that is just a trivial issue, it is more about exposing yourself and how other, unknown parties respond to that. Do we need to wear a condom when we are on Twitter?