In LSP: Laser / Sound Performance, artist Edwin van der Heide submerges his audience in the light of lasers, fog from smoke machines and abstract sound. Since 2004, he has travelled all over the world to give his laser show in all kinds of places, and it never was the same experience twice.

Van der Heide uses sine waves to produce both sound and visual patterns. As seen in the video, his waves can get quite complicated. The input device for the sound source and the light source is the same: they both react on Lissajous figures / Bowditch curves / sine waves. It is hard to find a frequence that brings forth both an audible, rhythmic sound as well as a nice and steady visual pattern. In most of his shows, the artist builds up slowly and later gets rather wild and chaotic.

“By combining audio with visuals the spatial perception of sound is often being reduced because of the two-dimensional nature of the image versus the three-dimensional nature of sound. With laser(s), it is possible to create three-dimensional changing environments that surround the audience. Here, the image is generated by projecting a laser on a thin layer of smoke or fog. Image and sound originate from the same real-time generated source in the computer. This results in a performance where image and sound play equally important roles. The environment challenges the audience to change their perspective continuously.” [1] 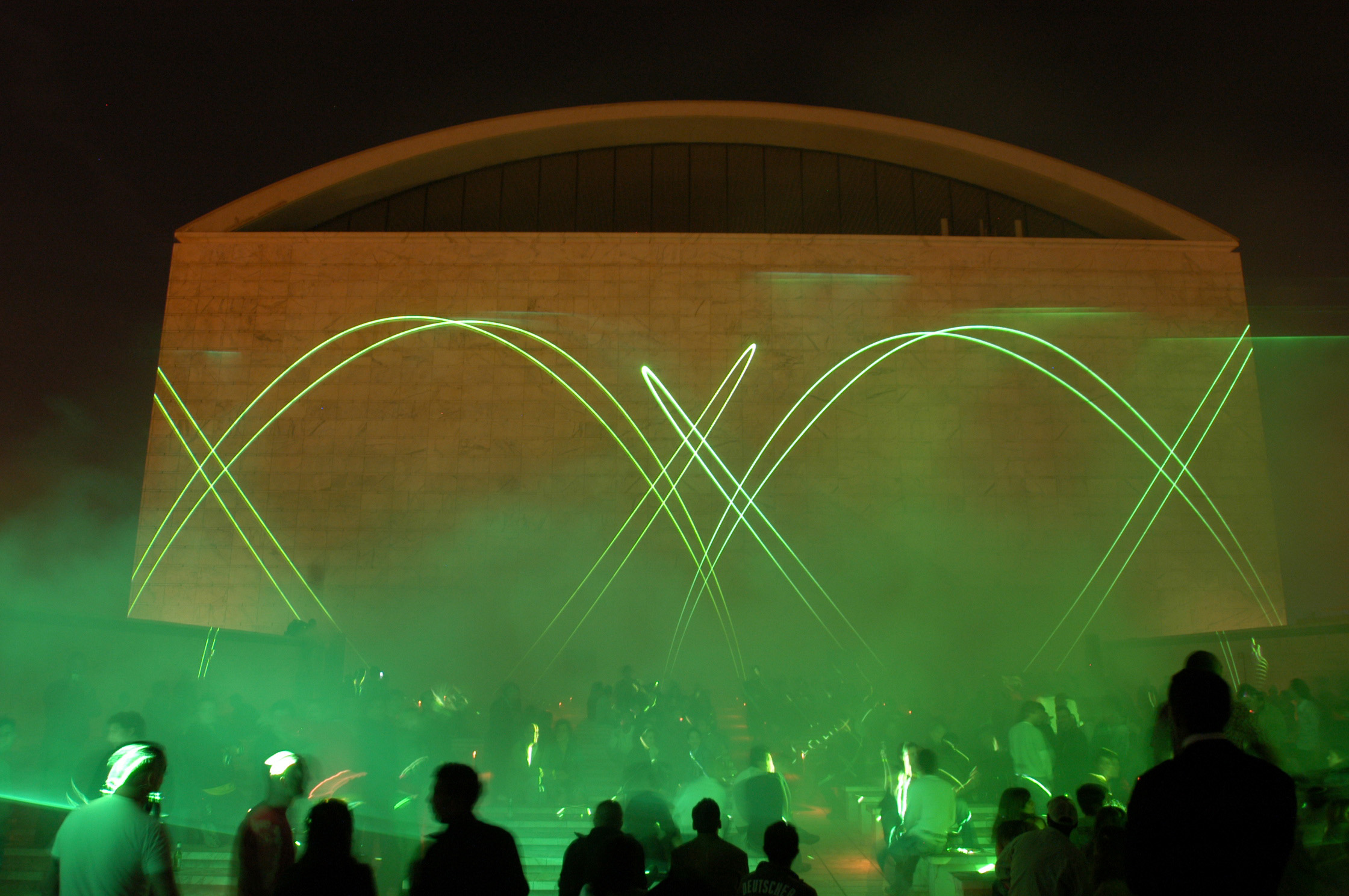 This artwork can be seen as related to Otto Piene’s Light Ballet (1961). Piene wanted to emphasize the importance of light in our lives. Also, he showed that our artificial light has advantages over the sun, which burns and singes. Electrical light, a.k.a. synonyms for the sun, can have the ability to calm and heal. [2]

Moreover, now that people have learned how to bring forth their own light, there is a striving to exhibit it in larger spaces. We want to reach out into the sky. This is “not in order to establish there is a new art world, but rather to enter new space peacefully – that is, freely, playfully and actively, not as slaves of war technology” [2]

Now, although van der Heide is also very much interested in sound (he is principally a sound artist), in this piece he stresses the surrounding effect lasers have to an environment. He wants to challenge his audience to constantly change their perspective, making them very much aware of the light. Lets say this is his way of bringing light as entity back into the consciousness of people, unescapably visualizing it as a three-dimensional environment.