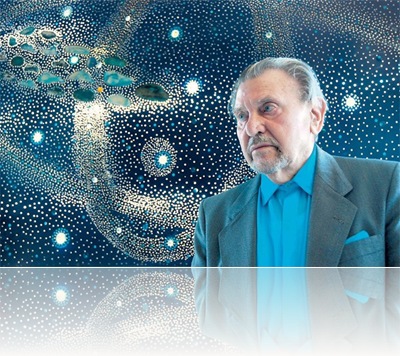 Gyula Kosice is an Argentinian kinetic artist whose work includes the use of light, color, space, and form and channels themes of utopianism, culture, time and space. Kosice is a member of the MADI movement, an abstract artistic movement that started in Buenos Aires, Argentina in 1946. MADI is an acronym which stands for “Movimiento, Abstracción, Dimensión, Inveción (Movement, Abstraction, Dimension, Invention).”

In 1940 Kosice proposed a project called “Hydrospatial City.” This was essentially a series of models, sculptures, architectural designs, and a number of other multi-media works. All of which flesh out the concept of “a sustainable community of mobile habitats.”0 The full exhibit features 19 three-dimensional models that are suspended at varying heights and represent these habitats floating around in space.

The purpose was to depart from the traditional form of inhabitable architecture, and follow a path more fitting with our technological progression in modern society. Kosice states, “In accordance with its impulses and vital responses, mankind has not advanced at an even pace concerning its own habitat.” Kosice is referring to “the small constraining flat which a society imposes upon us trough its compulsory economy.” (Google translation from Spanish)1

Kosice is trying to expose his audience to the possibility of a new type of living space. A radical shift from the cultural norms of our living conditions which have given so little way to advancement in the past century or so.

He proposes these structures, suspended in our atmosphere, could extract moisture from the clouds and create oxygen for us to breathe. They would use nuclear power to keep the structures afloat indefinitely.

While turning the Hydrospatial City from concept to reality may not be feasible in our near future, the exhibition is a fantastic social, environmental, and design experiment. Kosice’s attunement to the environment and prescience of our strained relationship with technology and culture is ahead of its time.

For him, I believe the project is a metaphor for larger MADI concepts: bucking the trend; disassociating one’s self from all ties to traditional methods of approach. “This transformation… supports our belief that it is not too bold to penetrate and investigate the absolute, through the possible, on the basis of a deliberate imaginative and chain-like interaction: a trans-individual imagination, without goals set in advance.”2

“To have our roots on the Earth or, to be more accurate, on the water planet – even though its atmosphere, its food and its waters are contaminated -, to witness, helpless, the persistent geographical and geological depredation, to watch how the ecological balance is slowly destroyed, to verify the constant demographic growth – all these are so many incentives for the radical changes we are already anticipating as a biological need. What we are suggesting here is the construction of the human habitat, actually using space at a height of a thousand and five hundred meters, in cities conceived of ad-hoc with a previous feeling of co-existence and a differentiated ‘Modus Vivendi'”3