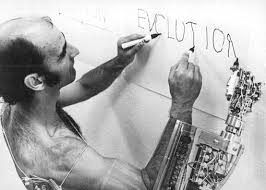 Stelarc : I think it’s also a result of my being found wanting between the realm of my production on the one hand and trying to articulate my ideas on the other. If you’re doing performances simply to illustrate your ideas, that doesn’t work! And if you’re trying to justify your actions through a prosthesis of textual analysis, that doesn’t work either. But there is sometimes an uncomfortable feedback loop when your performances start generating ideas, so it’s not always easy to resolve or to evaluate what’s affecting what. Unfortunately, what often happens is that people are critiquing your work more from what you’ve written than what you’re doing. Often they haven’t actually seen a performance. Then you’ve got other issues like ‘art and the audience’, and ‘art and entertainment’. Doing the performance with three hands writing EVOLUTION at the Maki Gallery in 1982 was very tedious for the people who saw that, if we evaluate it as an entertaining action. The idea was that one can simultaneously write with three hands, each hand writing a separate letter at the same time. Not being ambidextrous, this was quite a feat for me. Sometimes one image can encapsulate a whole performance – and that’s what happens with the EVOLUTION event. But that was probably not entertaining for the audience. On the other hand, there’s EXOSKELETON,  the six-legged walking machine. This is a 600 kilogram robot that walks on six legs. It walks backward, forward, sideways, it squats, it lifts, it turns. This performance can’t be captured by one image alone. People are often unamazed because you can see much faster and fancier robots done with digital animation. But what’s interesting for me is not simply going more and more virtual but rather exploring the interface between the actual and the virtual. I’m trying to investigate whether a physical body can function in a virtual immersive environment and whether an intelligent avatar might be able to perform in the real world by possessing a physical body. They are the sorts of issues that are more interesting – rather than moving increasingly into artificial intelligence and virtual reality.